While DDR3 has been touted by Intel to be the memory of choice for the Intel platform, Intel still hasn't given up on DDR2 which is pretty evident in their last three major chipsets. P35, X38 and X48 chipsets all have dual band memory controllers in them, that being they can support either DDR2 or DDR3 memory, depending on what the motherboard manufacturer decides to support. Some have placed both DDR2 and DDR3 slots on their boards for easier upgradability; this helps users who want the latest chipset motherboard but don't want to change their memory right away.

DDR2 is still a big player with all the big names still whipping out newer and faster modules based around the DDR2 standard; this is because of a two-prong attack. First is Intel's continuing support for DDR2 on its high-end chipsets, and secondly AMD's reliance on DDR2 for its AM2 and AM2+ based CPUs. Since AMD can't change memory standards like Intel can by simply changing a chipset, AMD's own CPU memory controller makes it a lot harder to simply swap standards, which has been the biggest problem with AMD's on-chip memory controller.

DDR2 is still kicking, and today we have a new kit from Patriot memory who have come through with a bang in the last six months with new modules hitting the shelves. We have been given their latest PC2-6400 4GB kit with low latency timings on offer. How does it fair compared to our tried and true Geil modules? Let's move on and see. 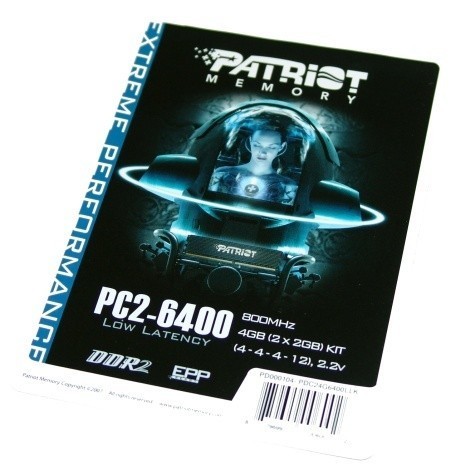 This is not the first set of modules we have received from Patriot so we pretty well know what to expect from them. The modules come in a plastic protective blister pack that splits open without the need for any tools, so if they are not the right modules for your setup, you can easily return them in as new condition to the shop or manufacturer for refund or swap purposes (some systems don't like certain memory modules, so it's good to have an insurance policy for this, and the returnable blister packs definitely help).

Removing the modules from the protective blister we get to see them in all their glory. Designed on a green PCB the modules make up a 4GB kit containing 2x 2GB modules; this is the norm today as every major player uses Dual Channel to get higher bandwidth without having to increase speeds as much as in past years.

The modules use an alloy chocolate brown heatspreader that has a fin design along its axis to increase surface area to promote better cooling inside the case. The Patriot company logo is embedded into one side of the modules with the DDR2 logo on the opposite side in raised lettering, making it a lot more attractive. 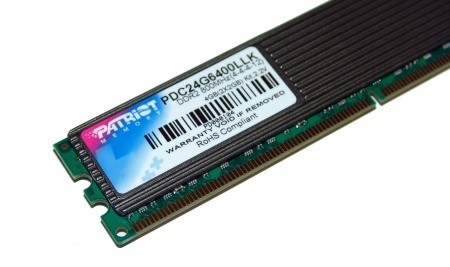 Each module has a sticker on one side that includes the model number, speed rating and timings. These modules are designed for a 4-4-4-12 rating and support up to a maximum of 2.2 volts under the manufacturer's warranty. 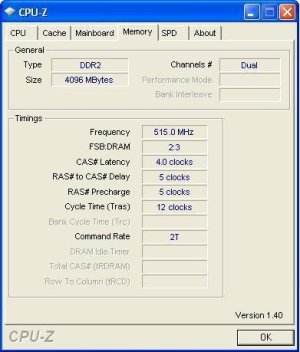 Despite being a high density memory of 4GB the modules still managed to overclock quite well. When lowering the timings to 4-5-5-12 with 2.1v we managed to get the memory to 615MHz which is 215MHz over the stock speed of 400MHz (DDR2-800) that the modules are designed to run at, which we were extremely impressed with.

Today our test system consists of GIGABYTE's P35-DQ6 motherboard which is an extremely flexible overclocker for DDR2 memory modules. To run our stock tests we had the system run with an 800 MHz memory divider which is the highest JEDEC memory standard for DDR2.

Here Patriot's memory has the lower timing ratings at stock and manages a slight lead. At overclocked speeds the Geil manages a better FSB/Memory ratio, so as expected Geil wins out here.

Again at stock Patriot managed a win, but at overclocked speeds it's just beaten out by Geil.

Sciencemark favors the Patriot memory at stock 800 MHz in both Cipher and Molecular tests, but it gives Geil the lead in the overclocked tests.

In our gaming tests we see that in the real world there is little difference between the Geil and Patriot modules at stock speeds, and only a few frames difference at overclocked. 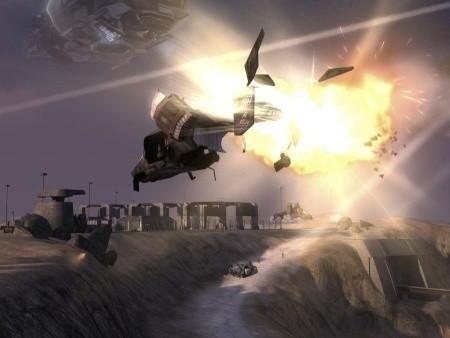 Lastly we see that with a little more stress on the system the memory results split a bit further apart.

Patriot have really put a lot of work into their memory products; their line of goodies keeps getting longer and it's good to see another player in the memory market who can actually put out some good modules.

The PC2-6400 modules are designed as a high capacity module kit, designed for users who require a lot of memory for encoding or even running Windows Vista, especially 64-bit versions. AMD's love for low latency memory also means this kit is solid gold for it. As for the Intel side of things, any DDR2 supporting platform will love this kit, but in order to get full use out of it you're going to need Windows XP 64 or Vista 64.

In all, Patriot's PC2-6400 modules really have the goods to be worthy of carrying an overclocking title, and with a 4GB capacity you're not going to run out of resources under Vista like 2GB systems can sometimes do. 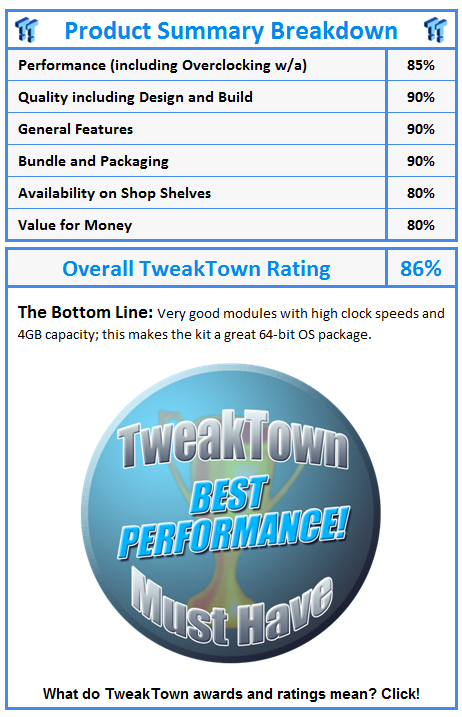