London, UK - March 12th, 2013. The Mobile World Congress in Barcelona attracted more than 70,000 delegates this year and was spread over some eight exhibition halls. Given the size of the show it is hard for any one vendor to stand-out but Sub10 Systems came away pretty pleased with its efforts during the week. 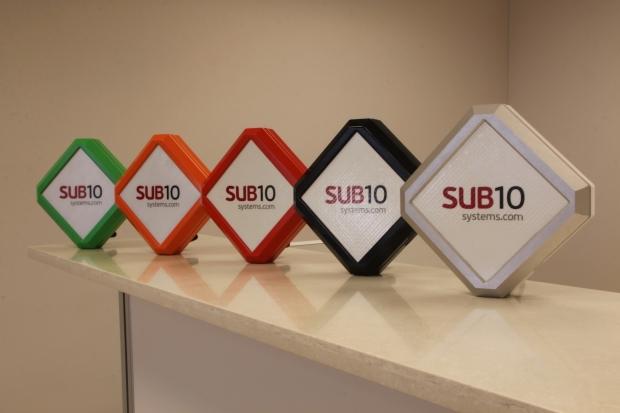 One of the world's largest mobile operators - Vodafone - and one of the leading network infrastructure vendors - Alcatel-Lucent - both choose to feature Sub 10's Liberator 60GHz wireless links on their booths on the show floor. What's more, the links on the Vodafone booth were live, delivering 1Gb full duplex and were a key part of the demonstration of the network operator's 4G capability.

Stuart Broome, CEO, was delighted to see Sub 10's technology featuring as part of one of Vodafone's flagship technology demonstrations.

"At events such as these, it is vital to have full confidence in any public demonstration. With the eyes of the mobile world upon them, and in an incredibly crowded and hostile radio environment with enormous potential for interference, it was particularly rewarding that Vodafone choose to use our links to beam live data streams across their booth and demonstrate their 4G capability," said Stuart. "That represents a really tremendous vote of confidence in our technology."

Meanwhile over on the Alcatel-Lucent booth, a key part of the company's network display was a section on backhaul and the various solutions that the company recommends depending on the location and type of small cell or metro cell network being deployed.

Among the range of options displayed on the booth's "network wall" was one of Sub 10's Liberator links. Alcatel-Lucent were making sure that all visitors to their booth understood the company's approach to small cell network planning from the deployment of the metro cells themselves right the way through to the backhaul connection to the core network.

And as if all that was not enough, chip vendors Texas Instruments, also highlighted its new relationship with Sub 10 at the show. For more information about how TI and Sub 10 have co-operated on the new V100 link featuring "Snapback" synchronisation technology visit the Sub 10 Systems website (www.sub10systems.com).

"There was plenty of background and foreground noise surrounding small cell backhaul solutions at MWC," said Stuart Broome, "so for Sub 10 Systems it was particularly satisfying to be in the forefront of the activity and to be partnering on real projects and live solutions with the some of the biggest names in the telecoms and technology industries."