During last Friday's live event hosted by the Austrian SSD manufacturer Angelbird, o.v.e.r.clockers.at already managed to break the previous world record in Futuremark's popular benchmarking suite PCMark05, but since their best CPU and motherboard fell victim to the extreme tweaking, the Austrian overclocking specialists failed to pass the 60.000 point mark. Today, o.v.e.r.clockers.at set out to make another attempt, but US overclockers had topped their previous record overnight and pushed the bar to a breathtaking 62.759 points - more than the Austrian's had hoped to achieve. Taking up the challenge nonetheless, o.v.e.r.clockers.at squeezed the absolute maximum out of their system. 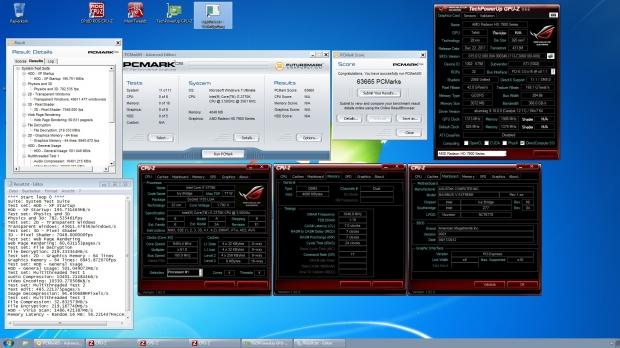 In the end, they came in at breathtaking 63.665 points and reclaimed the crown for the best PCMark05 score world-wide.

"We're thrilled to see Austrian's leading overclockers score a world record using gear from two Austrian quality brands", says Mag. Roland Mossig, Noctua CEO. "Congratulations to Angelbird for their outstanding SSDs which made this record possible in the first place and to o.v.e.r.clockers.at for their fantastic achievement."

Running at 6.404MHz, the Intel Core i7 3770K CPU used in the benching session was cooled with liquid nitrogen, but Noctua cooling components still played an important role. Firstly, the Austrian overclocking team swears by Noctua's popular NT-H1 thermal compound both for everyday use and extreme tweaking sessions. Secondly, o.v.e.r.clockers.at relies on Noctua fans to provide airflow over their LN2 pots and other system components.

"Pushing a system to its very limits and to speeds that allow you to set world records requires perfect timing and full concentration", says Matthias Zronek, o.v.e.r.clockers.at. "Good airflow over the right components helps to keep the system stable, but I simply can not afford using noisy high speed fans for this and loose my head over it - that's why we use Noctua's superbly quiet fans."

Last but not least, Noctua's award-winning NH-D14 CPU coolers have been used to pre-select the CPUs for the world record sessions: "We had to test 50 CPUs in order to find one that overclocks as nicely as we need it to", explains Matthias Zronek, o.v.e.r.clockers.at. "For this purpose, the NH-D14 is ideal. It's a child's play to install and provides ample cooling performance to get a good idea how well a given CPU will overclock."