Digiarty Software today announced the availability of Air Playit for Android. It is a long expected move for the company to make this reputable audio video streaming app compatible with Google Android phones. Powered with advanced video streaming method and CUDA, Air Playit helps users stream and enjoy real-time playback of their music & video library from computer at anywhere, all media presented seamlessly on their Android phones via WiFi, 3G or 4G network.

Air Playit became an immediate hit when it just came into Apple App Store in Aug.2011. So far over 1 million users have downloaded this free application which revolutionized the way of watching video on iPhone iPad. Both video conversion and iTunes sync are skipped. DRM encrypted videos as well as 1080P/1080i HD videos such as M2TS, AVCHD, MKV could be streamed to iOS devices for instant playing over air. 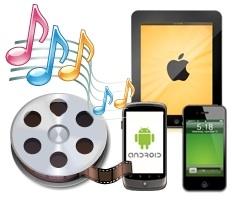 "Numerous 'thank you' emails arrived," said Jack, CEO of Digiarty. "In the meantime, we also got tons of inquiries on the release date of the Android edition of Air Playit." The reasons are obvious. 1) Google Android phones are rising quickly. Recent report showed that the 2011 market share of Android in the area of Smartphone is up to 60%. 2) The large and high resolution screen as well as fast processor make it the perfect mobile player for watching video on the go. 3) Android phone, however, supports relatively few video formats, only 3GP, MP4, H.264 and WebM.

Air Playit is a totally free app for streaming music & video to Android. Free download it at http://www.airplayit.com/

In addition, this Android video streaming app is upgraded with CUDA technology. The benefit is that users can play music and video on their Android phones remotely or locally without any delay, regardless of media format or file size. The ability of Multi-tasking Music Background Playback is also added which guarantees smooth music playing even in case of screen lock.

For the convenience of bloggers or website editors who may have interest in reviewing Air Playit, Digiarty also composed a PDF sheet with related images and text materials for reference.