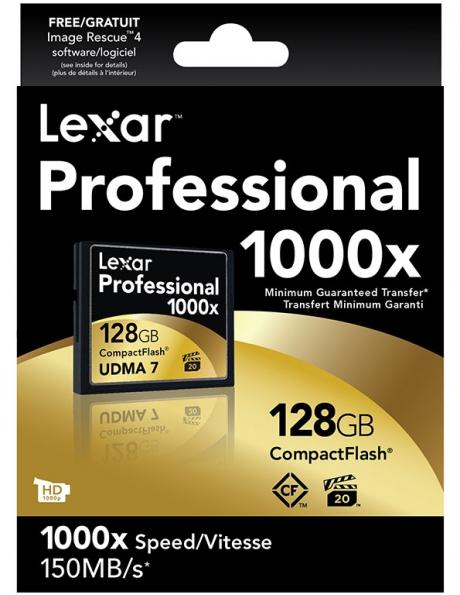 The Lexar Professional 1000x CF card will be available in 16GB, 32GB, 64GB, and 128GB capacities, and supports the VPG-20 specification, meaning the card has been tested and guaranteed for professional video capture streams at up to 20 MB/s, ensuring professional-quality video at high frame rates with no dropped frames.

"Lexar Professional CF cards are the only media I trust to capture my video images. With a significant performance upgrade and VPG-20 support, I can spend more time behind the camera and less time waiting for footage to transfer," said Lexar Elite Videographer Alex Buono, who is acclaimed for his video production work on Saturday Night Live. "Lexar has always understood how professionals shoot, manage, and edit their captured content, offering the tools and technologies to make the job faster and more efficient. The Professional 1000x CF card will help ensure that a memory card is never the bottleneck in the creative process."

The Lexar Professional 1000x CF memory card is compatible with all UDMA CF and CF devices. The card includes the latest version of award-winning Image Rescue software to help recover lost or deleted photo and video files, even if they've been erased or the card has been corrupted.

"Professional photographers who shoot both photos and video look to Lexar for storage solutions that will enhance their digital workflow and remove the obstacles that stand in the way of the creative process," said Manisha Sharma, director of product marketing for cards, Lexar. "The Lexar Professional 1000x CF card offers some of the best performance available, not only for use in-camera, but also when moving images and video from the card to a computer for editing and processing. Our goal is to allow shooters to focus on capturing great shots, including high-resolution images and HD or 3D video, instead of using up precious time processing in the studio."

The Lexar Professional 1000x CF card provides consumers with the quality and reliability they have come to expect from Lexar. All product designs are tested in the Lexar Quality Labs to ensure performance, quality, compatibility, and reliability with more than 800 intended digital devices.