Through the integration of Lucid's Virtu technology. MSI's Z68 based mainboards are able to combine the best features of Intel's HD 2000 and HD 3000 integrated graphics such as Lightning quick video decoding and the power of discrete graphics cards such as MSI's Lightning or Hawk series Graphics cards. Utilizing Lucid's Virtu technology allows MSI's Z68 mainboards to have low power consumption during light graphical workloads, like playing web games or viewing videos and give the graphical horsepower you need when playing 3D games. 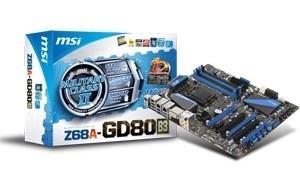 MSI's Industry-leading Graphics Technologies
Over the years MSI has quickly established itself as the most innovative player on the computer graphics market. MSI was the first mainboard manufacturer to support Lucid's HydraLogix technology the true vendor independent Multi-GPU graphics technology. MSI's graphics cards are known as the fastest in the world, with MSI's Lightning series being crowned multiple World Record holders thanks to its extensive engineering and maximum use of technology to give end users the most stable and fastest graphics card available. Combining the Award winning discrete graphics solutions from MSI with the nimble Graphics virtualization technology from Lucid.

MSI Z68 lineup
MSI will have a complete lineup of Z68 based mainboards with Virtu technology. All based on MSI's renowned Military Class II components, like Z68A-GD80(B3), MSI's mainboard with three way graphics supporting AMD CrossFireX and NVIDIA SLI technology. All MSI Z68 mainboards are equipped with MSI's one click overclocking technology OC Genie II boosting not only the Processor speed, but also the Intel HD2000/3000 graphics and memory speeds, of course also available on Z68A-GD65(B3). For HTPC users, MSI offers the Z68MA-ED55(B3) in a microATX form factor and has the same high quality components and dual graphics capabilities.