With all the world's e-commerce in their hands, mobile shoppers truly know how to use it from their phones.

According to Opera's State of the Mobile Web Report, there was a clear increase in the number of visits to Amazon.com towards the end of the year, compared to earlier in 2010.

The countries showing the clearest trend among the Opera Mini users were United States and Germany. Shoppers in these countries doubled their number of page views to Amazon.com towards the end of the year, as compared to the start of 2010. This Christmas was truly the season of the mobile shopper.

The sharp increase of shopping over the last year increased even more at the end of the year, towards the traditional holiday shopping frenzy. This is especially visible in the daily number of visits to Amazon.com during the U.S. shopping weekend starting with "Black Friday" and ending with "Cyber Monday". In both monthly and daily numbers, the increase is significant and shows the willingness to shop and browse online stores even on the go. 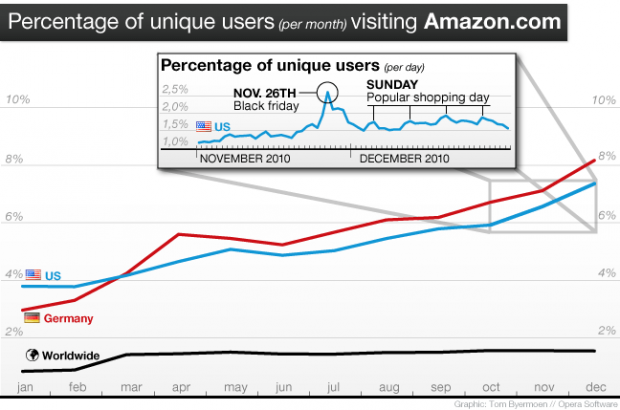 What we say: "It is not hard to imagine the benefits of the full Web right at your fingertips when shopping in a crowded store," said Jon von Tetzchner, Co-founder, Opera Software "'Is this TV on sale really a good offer, or can I get a better deal online? What are people saying on the Web about the advantages of this computer model compared to the more expensive one?' Full access to the Web via Opera Mini--even under difficult conditions such as crowded cellular networks--puts power back in the hands of the consumers."

Opera Software ASA has redefined web browsing for PCs, mobile phones and other networked devices. Opera's cross-platform web-browser technology is renowned for its performance, standards compliance and small size, while giving users a faster, safer and more dynamic online experience. Opera Software is headquartered in Oslo, Norway, with offices around the world. The company is listed on the Oslo Stock Exchange under the ticker symbol OPERA. Learn more about Opera at http://www.opera.com/.