North America's 12 Top Overclockers Gear Up to Fight, Fans Get Ready to Predict the Champion 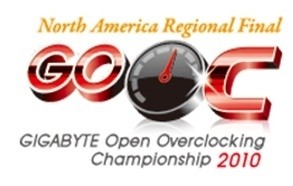 City of Industry, Calif., July 20, 2010 - GIGABYTE TECHNOLOGY CO., LTD., a leading manufacturer of motherboards and graphics cards is pleased to announce the regional finals of the 3rd annual GIGABYTE Open Overclocking Championship (GO OC 2010) are currently underway globally, with the North America Regional Final to be held at the Pacific Palm Golf Resort in City of Industry, California, U.S.A. on Saturday, August 7, 2010. 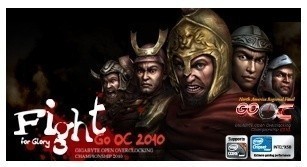 The GO OC 2010 North America Regional Final winners will not only have the honor of representing North American at the GO OC Global Final, but will also receive grand prizes of special designed GO OC system hardware valued at well over US$3,000 sponsored by GIGABYTE, Kingston, Thermaltake, iBuyPower and CyperPower.

Spectators who are not able to make it to the North America Regional Final will be able to follow the event via a live broadcast and videos provided by Overclocking-TV: http://www.overclocking-tv.com/live. Stay tuned, the Fight will begin soon!

- Make your prediction, get a chance to Win over $ 1,000 valued prizes

From July 21 to August 5, 2010, GIGABYTE will host an online competition: "Guess the winner" at the GO OC 2010 North America Regional Final website. Just sign up on the GO OC official website (http://gooc2010.gigabyte.com/north-america/guess-winner.html ) and make your prediction for your chance to win GIGABYTE X58A-UD5 and X58A-UD3R motherboards, a cash prize of $200 for 1 winner, a cash prize of $100 for 3 winners and a GO OC Limited Edition T-shirt for 3 winners.

GIGABYTE, headquartered in Taipei, Taiwan, is known as a global leading brand in the IT industry, with employees and business channels in almost every country. Founded in 1986, GIGABYTE started as a research and development team and has since taken the lead in the world's motherboard market. On top of motherboards and graphics accelerators, GIGABYTE further expanded its product portfolio to include notebook and desktop PCs, digital home entertainment appliances, networking servers, communications, mobile and handheld devices, servicing every facet of people's lives at home or business. Everyday GIGABYTE aims to "Upgrade Your Life" with the most innovative designs and impeccable quality and services. Visit www.gigabyte.com for more information.