Shot Second and Croteam are proud to announce that our action-packed virtual board game Battle Bolts is now available on PC via Steam. 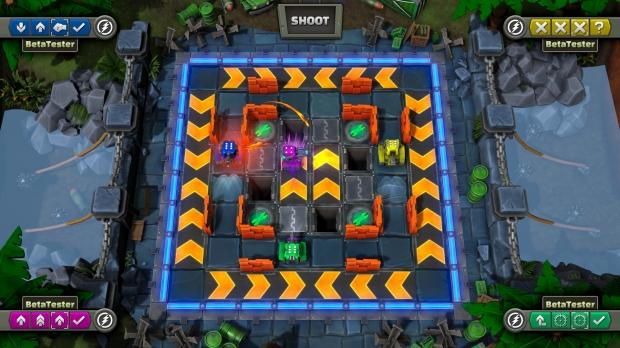 Published under the Croteam Incubator banner, Battle Bolts is a strategy multiplayer game where up to 4 players battle it out in a deadly arena by programming their moves in advance. In an effort to outsmart and outmaneuver their opponents, players can enjoy a traditional board game experience against friends and AI.

"I've always been a huge fan of board games. In a way, they have made an impact on my life almost as much as music has. So, in between composing for Serious Sam and The Talos Principle I've played around with prototyping different games that would take care of my board game itch." - explains Damjan Mravunac, founder and lead game designer at Shot Second.

"Finally, my mind was set on Battle Bolts, so here we are. It's everything I love about board games transferred to a screen. I can't wait for everyone to try it out." - Mravunac concluded.

Battle Bolts launches after a short and sweet Early Access campaign during which the team focused on adding online play, improving AI and further balancing game rules based on community feedback. In short, the number of bugs went down and the fun factor went up.

Battle Bolts is a strategy multiplayer game where up to 4 players battle in a deadly arena by programming their moves in advance!