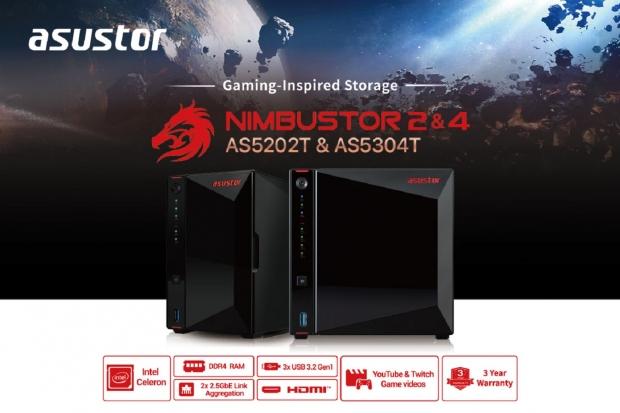 The Nimbustor 2 and 4 inherit the aesthetics of the AS4002T and AS4004T. The diamond-cut magnetic panel is resistant to dust and helps protect hard drives inside from impact. The Nimbustor also retains the same easy installation process from the AS4002T and AS4004T, which features removable tool-less hard drive caddies. The Nimbustor also introduces a new red and black e-sports aesthetic to appeal to tech enthusiasts and a new HEVC/ VP9 10bit Profile2 encoding engine which greatly reduces CPU usage for smoother video streaming and playback. Plex Pass is supported as well as third-party media players to enjoy 4K HDR on the HDMI 2.0a port.

The Nimbustor 2 and 4 come with ADM 3.4. ADM 3.4 now comes with a brand new theme for enthusiasts as well as a new version of Takeasy. The newest Takeasy can now download videos from subscribed YouTube and Twitch channels automatically. The Nimbustor 2 and 4 are also better than ever for iSCSI applications, giving even greater options for applications that do not support network drives because iSCSI drives appear like normal internal hard drives as well as increased stability compared to network drives. The backup and restore features of ADM 3.4 are even better than before with the recent introductions of Snapshot Center and EZ Sync. The Nimbustor's hardware gives even greater and faster performance to a variety of multimedia applications, including but not limited to ASUSTOR Portal, Plex and Roon Server. ASUSTOR's Nimbustor 2 and 4 are backed by a three year warranty. Please contact your local dealer for more details

Founded in 2011, ASUSTOR Inc. was established via direct investment from ASUSTeK Computer Inc. The ASUSTOR brand name was created as a portmanteau of "ASUS" and "Storage". ASUSTOR is a leading innovator and provider of private cloud storage (network attached storage) and video surveillance (network video recorder) solutions, also specializing in the development and integration of related firmware, hardware and applications. We are devoted to providing the world with unparalleled user experiences and the most complete set of network storage solutions possible.