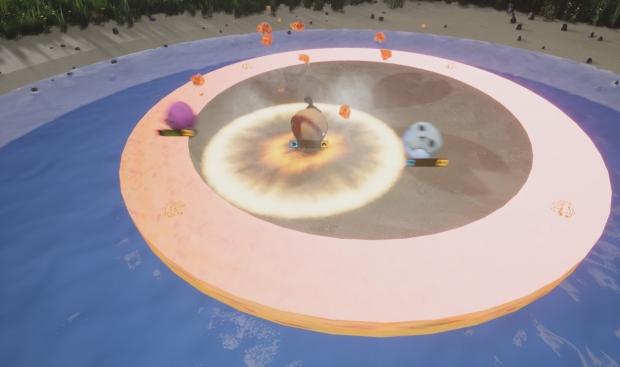 Have you ever played a minigame involving shoving your friends off of a level that keeps getting smaller? Sure you have! It's a time-tested system seen in dozens of side games, minigames, or quickly-made bonus games in other titles. The developers of Table 9 Studio ask - why has that solid core always been relegated to a bonus or an extra, and not brought to the forefront as a full-fledged title?

Sumo answers the call, featuring a wide array of unique characters, fast-paced gameplay, awesome abilities, multiple levels with hilarious hazards, and a high skill ceiling, where positioning, timing, and mastery matter. In Sumo, anyone can jump in and learn to play within seconds, and everyone has a shot at winning.

"Tons of promise from a team with years of experience finding the fun in its characters. I can't wait to see it finished."

"It was so much fun, can we play it again tomorrow!?"

-Josh, age 9, after playing with his friends for the first time for 3 hours straight.

"I have to say it was a blast! ...To sum it up, the fights were real fun, and people here really loved the game!"

"How long before I can play it with my friends? I can't wait!"

-Tanner, age 12, after beating all the adults who dare challenge him.

Sumo is built in Unreal Engine 4 entirely in its Blueprint system. Not a single line of code was written for this title or any of its features, including online multiplayer support. The title is planned to release to consoles at a later date, but we cannot confirm other platforms at this time.

Gather your friends for a night of tense and hilarious battles - Sumo is available now on Steam Early Access: https://store.steampowered.com/app/858960/Sumo/