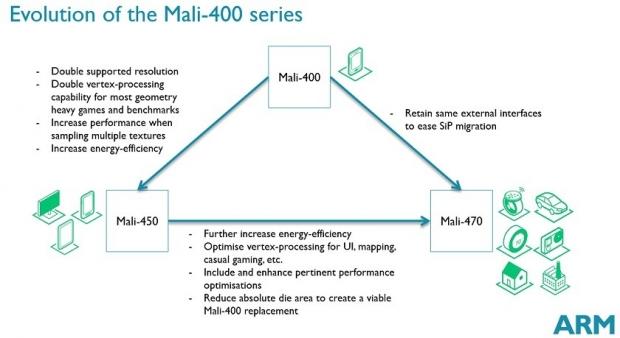 "ARM scrutinizes every milliwatt across the entire SoC to enable OEMs to optimize energy-efficiency and open up new opportunities," said Mark Dickinson, vice president and general manager, multimedia processing group, ARM. "Energy-efficiency is particularly important for devices requiring sophisticated graphics on a low power budget such as wearables, entry-level smartphones and IoT devices. Mali-470 has been designed to meet this demand as it will enable enhanced user interfaces that are extremely energy-lean."

Mali is the number one licensable GPU IP in the mobile market with Mali-400 powering more than a billion devices. Building on the success of Mali-400, Mali-470 delivers the same rich performance while halving the power consumption at the same process geometry. This will provide ARM's silicon partners with scalable SoC options to enable them to create embedded graphics subsystems that meet the needs of new low-power devices.

Extending the Smartphone Experience to Other Devices

Ease of Integration and Application Development

The majority of Android, Android Wear and other emerging operating systems use the OpenGL ES 2.0 API and driver stack. For modern user interfaces, OpenGL ES 2.0 offers the ideal balance between pixel control and energy-efficiency. Mali-470 uses the same industry-standard OpenGL ES 2.0 driver stack as Mali-400 so there is no need to re-optimize existing applications and developers receive the added benefit of long-term support.

Manufacturers are focused on creating products with unique functionality to meet the constant demand for more immersive experiences with mobile and IoT devices. For example, sports and smart watchmakers compete on the quality of information their products offer to athletes to give them better insight into their performance. More intense graphics also open the door for real-time performance and health data to be evaluated and displayed in rich new ways. For IoT device-makers, energy-efficiency is fundamental in this graphics equation. This is where Mali-470 is positioned, as it enables makers to build stronger display capabilities and touch interfaces into highly power-constrained devices that historically relied on push buttons or limited displays.

"Along with connectivity, the IoT era is ushering in richer graphics experiences in almost every application and every aspect of our lives," said Jim McGregor principal analyst, TIRIAS Research. "Even wearables are going to require an immersive experience. With greater power efficiency and support for OpenGL ES 2.0, Mali-470 will enable these ultra-low power solutions to provide that experience. With Mali-470, future wearables and other low-power embedded applications can offer the vibrant displays and touch interfaces users have become accustomed to on smartphones."

"The Mali-400 GPU is already an integral component in many of MediaTek's current SoC designs and it has enhanced our ability to deliver chips that propel excellent user experiences," said Jeffrey Ju, senior vice president, MediaTek. "The Mali-470 GPU, with its lower power profile, opens up new opportunities for even more power-constrained devices without compromising the user's visual experience."