The latest and most important Maker & DIY news - Page 4.

Meet the MicroView, a chip-sized Arduino with built-in OLED display

Anyone who follows my articles here at TweakTown knows that I am a sucker for new Arduino-compatible development kits, and I especially like the micro-sized boards that are easily hidden inside projects. As such, a new Kickstarter campaign has caught my eyer and I just had to share it with everyone. 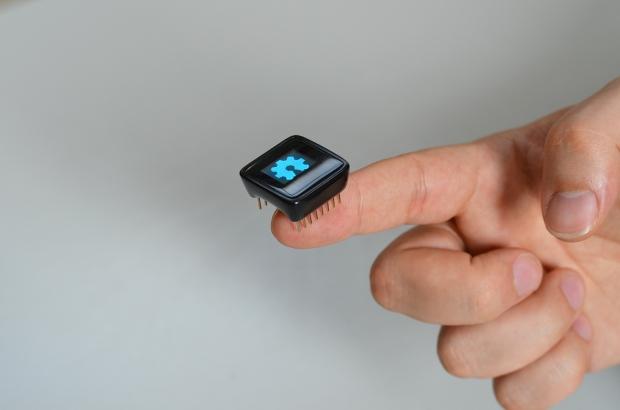 The MicroView is a "Chip-Sized" arduino-compatible that features a built-in OLED display, and is sized perfectly for bread boarding, or use in many different projects. Unlike many of the Arduino-compatibles that pop up on KickStarter every month, MicroView includes a purpose designed course that walks users through building 11 different circuits, making the MicroView an ideal development kit to use in a classroom environment. 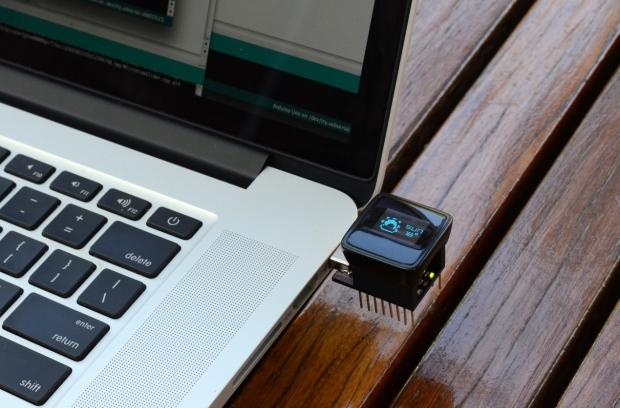 At some point, I am sure that most of us have fantasized about being the stereotypical mad scientist who spends his days in a lab filled with chemical experiments and electricity arcing from one source to the other. While most of us will never make it to this point in our scientific endeavors, we can have a cool device that sends arcs of electricity shooting from one electrode to another, and have it play music at the same time. 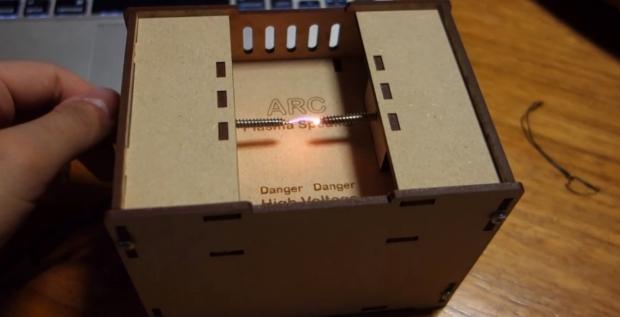 A new Kickstarter campaign from ExcelPhysics is offering kits that let backers build their own speakers that emanate sound by using nothing but the plasma generated when electricity arcs from one electrode to another. "A plasma speaker plays music just like your normal speaker but it uses an arc of electrical plasma running at 30,000 volts," the company said on its Kickstarter page. "Most people aren't aware that plasma arcs can be modulated to generate sounds so your friends will be in for a surprise when you explain to them that the plasma arc IS the speaker! Your typical speaker uses an electromagnet to vibrate small drums, but a plasma speaker uses an electrical arc to ionize and compress the air around it to play music, all with no moving parts!"

Check out this dual Arduino Micro XPlorerBoard on Kickstarter

Electronic education kits were one of the highlights of my youth, and I spent many hours attaching resistors, wires and other components together via those little shiny springs. Today with microcontroller boards such as the Arduino being as cheap as they are, educational electronic kits have taken on a whole new look, and ease of use. The Portable Dual Arduino Micro XPlorerBoard is one of those new easy to use educational electronic boards. 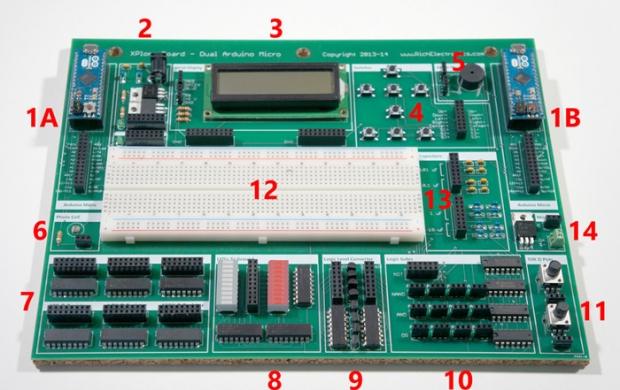 Featuring support for two Arduino Micro boards, the XPlorerBoard makes life easy by eliminating loose parts, and adding in very handy features such as a 3V and 5V logic level converter, on-board power supply, and a full compliment of analog and digital sensors. Since the XPlorerBoard was designed for education, the entire board is coated in an anti-static coating and all of the leads on the bottom are protected as well.

The entire board along with accessories fits neatly into a standard binder as well, making the board portable and easy to carry to class or your favorite MakerSpace. The XPlorerBoard is being offered through a KickStarter campaign right now and appears to be one of the best value educational development kits on the market at the moment. Best of all, the XPlorerBoard is a product of Savanna, Georgia, and not too far from my home town!

Pi-Bot is an educational robot platform built around the Arduino

Educational robotics hold a special place in my heart, and over the last few years, I have designed several different models that I have used to teach both my self as well as others the theory behind embedded electronics for robots. All of my designs have been based on the Arduino development platform though, something many educational robotic kits default to. A new project on Kickstarter aims to continue trend and focuses its build around Arduino to offer an affordable educational robot. 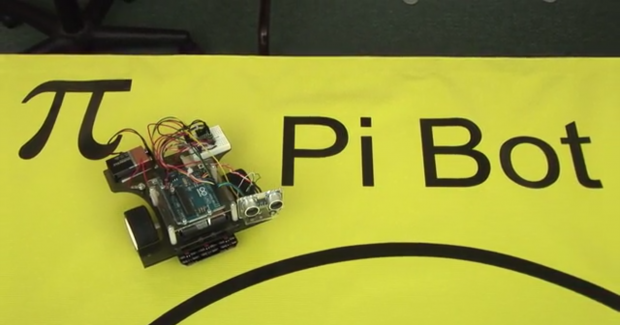 The Pi-Bot has been engineered from the ground up, with several full redesigns throughout the process to make things more affordable, functional, and educational. It's makers have included students in the design process as well to ensure that the project is appealing and fun. The Pi-Bot gets its name from its Pi symbol shaped chassis, and not from the utilization of a Raspberry Pi like the name would have you believe. The educational kit is being offered through Kickstarter and is well on its way to reaching its funding goal now. Check out the source link below for more information. 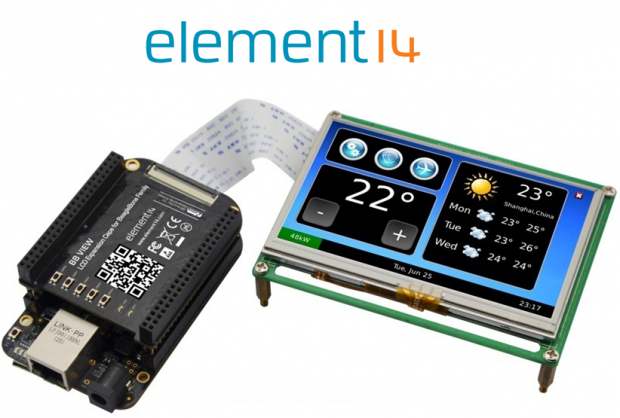 Recently, Element14 unveiled one of the coolest "Capes" for the Beagle Bone series to date. Dubbed the Beagle Bone View, these new add-on LCD screens come in 4.3-inch and 7-inch sizes and feature a 4-wire resistive touch panel. The 4.3-inch model features an effective resolution of 480x272 pixels while the 7-inch version has a slightly higher resolution of 800x480 pixels. The boards are powered directly from the Beagle Bone Black or Beagle Bone with no external power connection needed to the screens.

For the better part of the past decade 3D printing has mainly been relegated to printing objects in hard solid plastics such as PLA, ABS, and Nylon, but recently, great progress has been made in the advancement of flexible, more rubber-like filaments. One of the major hurdles has been the development of a reliable extruder that can feed the flexable filament into the hotend. 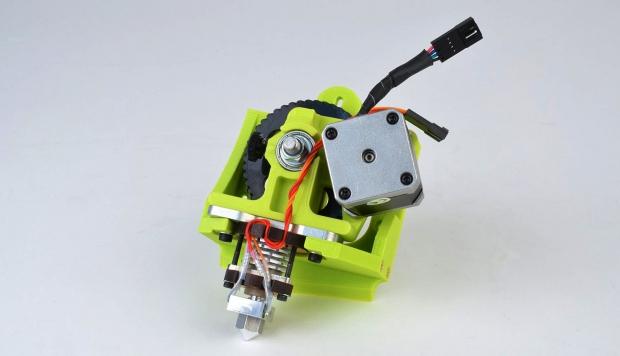 Today Lulzbot released its new Flexystruder Tool Head designed for use with its TAZ 3 3D Printer. Lulzbot says that the FlexyStruder was specifically designed for use with NinjaFlex flexible 3D Printing filament, and that setting up the new tool head is fast and easy. From what I can tell, the Flexystruder is based off of Lulzbot's Budaschnozzle design and is mounted on a carrage designed to fit into the TAZ 3's Z quick-change extriuder carrier.

If you are the DIY sort that is always tinkering with One project or another, you may be familiar with the Raspberry Pi. This cheap little developer board has found its way into many a cool project since it launched. One thing that the device has been missing is its own sound card. 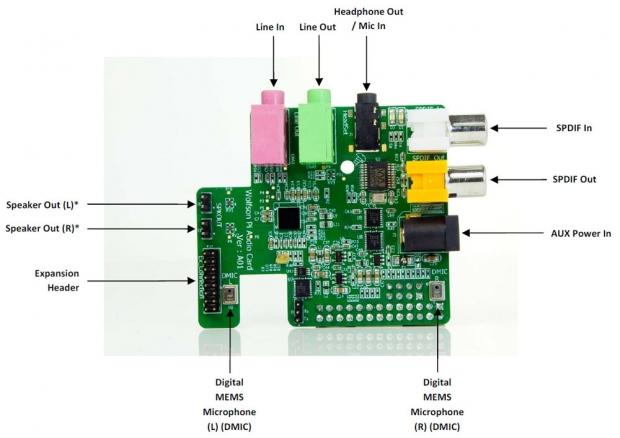 Element 14 has announced the launch of a sound card for the Pi to fill that gap in features. A Wolfson audio processor is integrated into the sound card and supports audio at 24-bit/192KHz. It can be directly connected to an amp using a 3.5mm output or a digital S/PDIF output.

The sound card also handles audio recording using a pair of onboard MEMS microphones. One of the nicer features of this card is the price. The Wolfson Audio card for Raspberry Pi sells for $33. Affordability is one of the hallmarks of the Pi and its accessories.

This morning Afinia announced the launch of its next-generation 3D Printer that features several innovative new features included automatic bed leveling and nozzle height detection. The new Afinia H480 is the successor to the popular H479 which was the company's firs desktop 3D printer and quickly grew in popularity with makers everywhere. 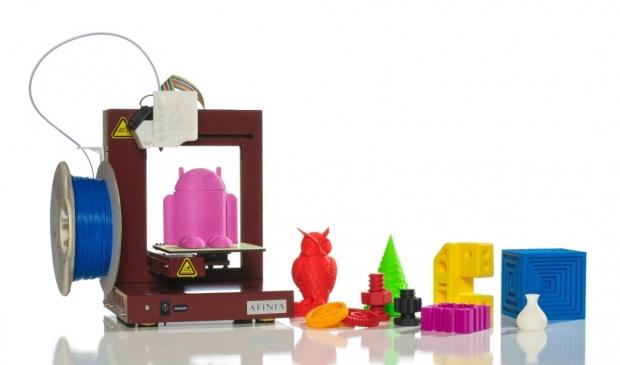 The new Afinia H480 features a printing envelope of 5-inches cubed, a build envelope of 5-inches cubed, and features a heated build platform. The entire printer has a footprint of just 9.6-inches by 10.2-inches by 13.7 inches, allowing it to fit on any desktop surface. The inclusion of Automatic Leveling takes the H480 a step above the competition as it removes one of the tedious setup task that can consume valuable time. Automatic leveling works via a detachable Platform Calibration Probe which measures the build platform at nine different locations to ensure a perfectly level printing surface.

There are gadgets out there for just about any need you can think of. If you are a fan of wine, a new gadget has surfaced that claims to let you make water into wine in your home. The gadget uses technology to speed the wine making process. 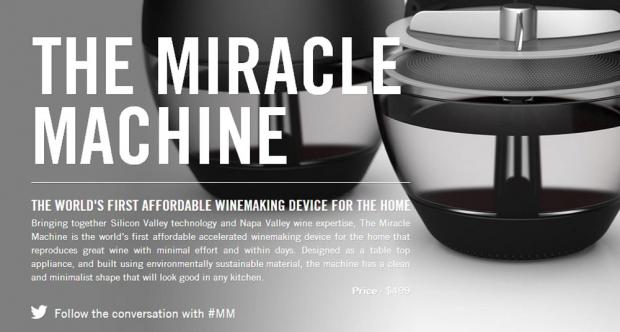 The Miracle Machine has a bunch of sensors inside a carafe along with heaters, pumps, and transducers that can make wine quickly. The gadget also promises to be economical. The people behind The Miracle Machine say that you can make a bottle of wine each week in the machine for about $10 per month.

The Miracle Machine itself isn't exactly cheap at $499, but if you want to make your own wine that might not be such a bad price. The ultrasonic sensor in the device is able to speed the flavor development of the wine according to the designers.

HobbyKing is the biggest name in the radio-controlled hobby world, and the company continues to blaze the trail in making the RC hobby more affordable. This week HobbyKing announced its new RotorBits lineup of chassis and parts for DIY multi-rotors. The RotorBits line revolves around a modular design that allows users to build a multi-rotor using common 10mm square shafts and molded plastic parts. 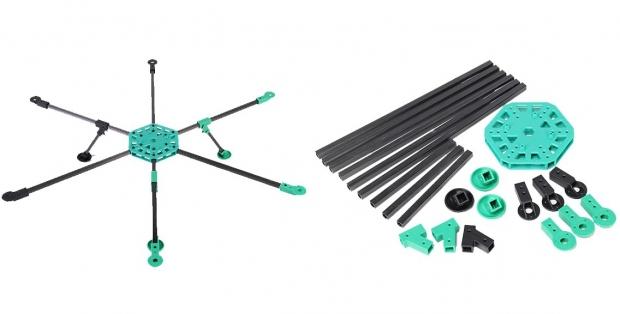 Kicking things off, HobbyKing has launched three DIY frame kits that will allow customers to easily build a TriCopter, QuadCopter, or Hexacopter in less than an afternoon. The modular system utilizes zip-ties as easily breakable fasteners. This allows the frame to survive light crashes with only cheap ziptie to replace. The company has a full lineup of spare parts, accessories, electronics, and mechanical parts for the RotorBits line and allows users to mix and match parts to build their own creations.