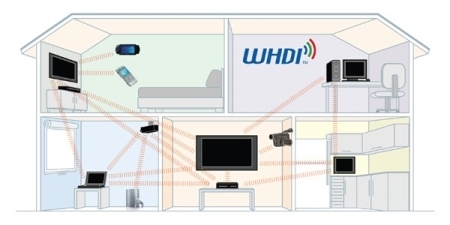 Wireless Home Digital Interface, which prefers to be known by its nickname, WHDI, appears to be pitting itself against its main competitor, WirelessHD, and the expected trials and tribulations in gaining widespread adoption, may shape the future of this wireless field.

WirelessHD, is supported by industry giants such as Panasonic and Sony and, has also drawn support from companies such as Samsung and Toshiba. It proposes utilising a 60 GHz band, thereby delivering uncompressed 1080p video, at 4 Gbps.

WHDI tackles the equation from another angle however. It shares the same viewpoint as WiFi technology, by proposing to deliver coverage throughout the home. This is in clear comparison to other solutions which, merely, succeed in providing coverage within a set location.

Perhaps WHDI's similarities with WiFi do not end there. It operates in the 5 GHz band, just like WiFi protocols 802.11a/n and, polishes its performance by removing bandwidth overhead normally associated with the WiFi protocol, correcting transmission errors.

Like a re-run of DVD format wars, WHDI comes with its own fan base. Apparently, Samsung, Sony and Sharp have all been linked to WHDI and it won't be long before end users can indulge in a form of WHDI goodness.

Belkin's Flywire, inspired by WHDI technology, will perhaps give users a taste for what is to come in the future, Notably however, it apparently won't be compatible with the WHDI protocol.

Whatever purpose wireless HD will serve in the end user environment, it is interesting to ascertain that WHDI implementation will avoid compressing video bits and instead, will assign a lower priority to those bits it considers less significant. This will, it is claimed, reduce the impact caused by any wireless interference present.

When wireless HD technology reaches a price point where it is suitable for mass adoption, the next generation standard battle will likely begin.

Will feature or function prevail however? It is certainly looks like the overall package will dictate which standard is adopted by end-users.
Newsletter Subscription