All NewsBusiness, Financial & LegalCases, Cooling & PSUContests & GiveawaysCPU, APU & ChipsetsDealsDisplays & ProjectorsGamingMotherboardsScience, Space & RoboticsStorageVideo CardsVirtual & Augmented Reality
All ReviewsAll ArticlesAudio, Sound & SpeakersCases, Cooling & PSUCPUs, Chipsets & SoCsComputer SystemsDisplays & ProjectorsGamingMotherboardsNetworkingPeripheralsStorageVideo Cards
GuidesGamingAsk the ExpertsNewsletterAboutForums
Epic Thanksgiving Giveaway: MSI GeForce RTX 3080 GAMING X TRIO!
Expreview have just given the heads up that NVIDIA has done the same thing with the 9600 GT as they did with the 9800 GTX; that is, shrink the die from 65 to 55nm. However, where the 55nm version of the 9800 GTX gets a '+' tacked onto the end of its name, the 55nm 9600 GT does not. 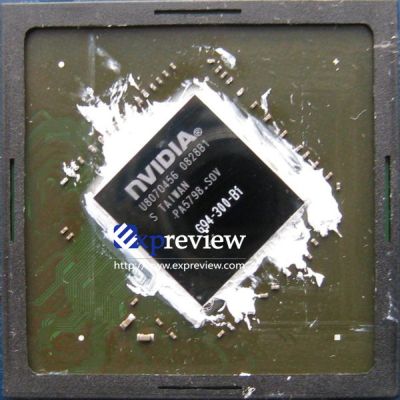 To find out if it's running a 55nm core, you need to read the markings on the die. The original 65nm one reads G94-300-A1 whilst the newer 55nm reads G94-300-B1. Clock speeds are left the same but it's inevitable overclocking headroom will be somewhat better for add-in partners and users.
Newsletter Subscription