All NewsBusiness, Financial & LegalCases, Cooling & PSUContests & GiveawaysCPU, APU & ChipsetsDealsDisplays & ProjectorsGamingMotherboardsScience, Space & RoboticsStorageVideo CardsVirtual & Augmented Reality
All ReviewsAll ArticlesAudio, Sound & SpeakersCases, Cooling & PSUCPUs, Chipsets & SoCsComputer SystemsDisplays & ProjectorsGamingMotherboardsNetworkingPeripheralsStorageVideo Cards
GuidesGamingAsk the ExpertsNewsletterAboutForums
RTX 4090Windows 11Halo InfiniteBattlefield 2042Elon MuskGTA 6RTX 3080HDMI 2.1
As though their current lineup isn't inundated with confusion already, NVIDIA plans to unleash yet another model in its upper desktop segment tomorrow; the 9800 GT. The card is certainly nothing revolutionary either (as is the case across much of the 9 series lineup); it's for the most part a re-branded 8800 GT with its 512MB GDDR3 memory, 112 Stream Processors and identical core/memory clockspeeds. 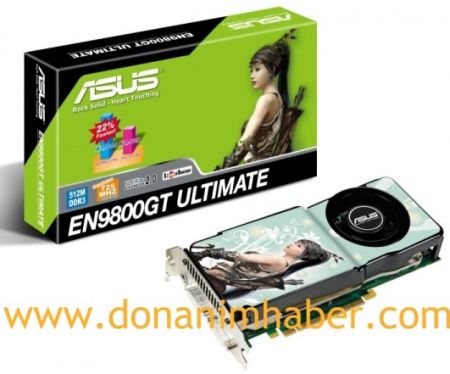 ASUS has however decided to make their upcoming EN9800GT Ultimate stand out a little more by increasing clockspeeds out of the box to 725MHz on the core, 2000MHz memory and 1750MHz shader clocks. A picture of the card that was spotted by the lads at TechConnect shows a heatsink which looks very much like the one used on the G92 8800 GTS.

Thanks to Donanimhaber for the early peek.
Newsletter Subscription