It is probably one of the more exciting demos that we will see during IDF Spring 2008. 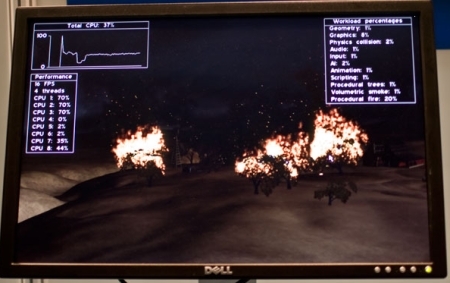 The "Smoke" demo was pictures and videoed running at around 16 frames per second with almost all virtual cores in operates besides CPU 4. For a CPU still in development and not in mass production, that's a pretty good sign. It is unclear whether the CPU was handles all calculations or not but we would assume so. If that is the case, 16 FPS ain't that bad at all when all is said and done.

You can check out the short video and shots over at TG Daily. I couldn't actually get the video working due to no H.264 Flash Player support - if anybody knows how to get that up and running, do let me know!