All NewsBusiness, Financial & LegalCases, Cooling & PSUContests & GiveawaysCPU, APU & ChipsetsDealsDisplays & ProjectorsGamingMotherboardsScience, Space & RoboticsStorageVideo Cards & GPUsVirtual & Augmented Reality
All ReviewsAll ArticlesAudio, Sound & SpeakersCases, Cooling & PSUCPUs, Chipsets & SoCsComputer SystemsDisplays & ProjectorsGamingMotherboardsNetworkingPeripheralsRAMStorageVideo Cards & GPUs
GuidesGamingAsk the ExpertsNewsletterAboutForums
AMD Zen 4Intel ArcBattlefield 2042RTX 3090 TiRTX 4090RTX 4080GTA 6Elon MuskHDMI 2.1
Mobile Devices, Tablets & Phones
The last few days have seen an increasing number of articles hinting that Apple is close to releasing a new iPhone model, either to replace the current one, or as a high-end version of the current one. Those rumors are all because NAND memory manufacturers have received a large order from Apple. You can read more about it here or here. 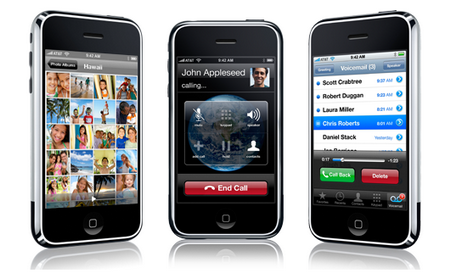 Looking deeper beyond the rumors, another article confirms that Apple will launch an advanced version of the iPhone handset, with 3G capabilities towards May or June. Steve Jobs has mentioned many times that the convergence of so many technologies inside the popular handset means a balancing act of which features should be present now verses which one's should be introduced later. He has also emphatically stated that there will be an iPhone with 3G technology.

Apple's use of EDGE, instead of 3G, has given online linkup speeds of 2.5G for the current model using a combination of mobile phone towers, and Wi-Fi networks. Nevertheless, the extra bandwidth expected on a 3G phone will always be welcome when considering how much one downloads from the net. In addition, the 3G option will enhance iTunes download speeds, allowing for more income in less time for the Apple giant of the music world.

Furthermore, Sandisk, an extremely large user of NAND chips has been having a bear season with its stocks, understandably so, since the memory chip market is all but saturated. SSD is believed to be the savior of this flagging sector, but the flash Solid State Disk market has only just begun. With the likes of Apple (Macbook Air), and ASUS (Eee PC) pushing the demand for those technologies. The article can be viewed here.
Newsletter Subscription