Sony has just published a very interesting patent that would use blockchain ledgers to keep track of in-game items such as cosmetics and user-generated content, which includes screenshots, video, and even user-created items. This system could theoretically be tied to a token economy where users buy and sell digital content. 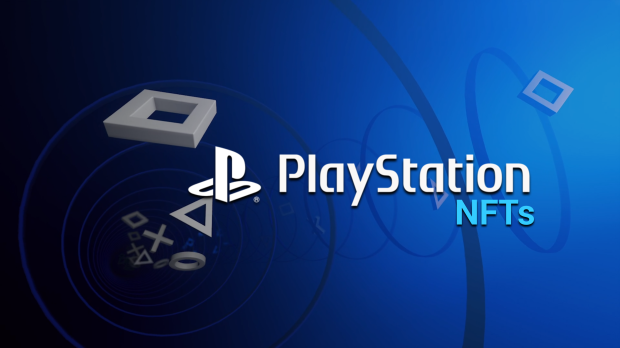 Note: This existence of this patent does not mean the features described herein will be available in any finalized product or service.

Sony's latest patent, US20220358450 - TRACKING UNIQUE IN-GAME DIGITAL ASSETS USING TOKENS ON A DISTRIBUTED LEDGER, has some far-reaching implications for the future of the PlayStation brand. The core idea is pretty simple: Sony is patenting a way to use blockchain ledgers to keep track of digital content to authenticate and appraise value so that the digital assets can be sold in a marketplace. Assets include cosmetics, in-game items, customized weapons and armor, game save files and loadouts, and even social content created by PlayStation users like screenshots and video. We have to stress that a lot of this is theoretical and there's a good chance that most of the features described in the patent will not be used.

Like all patents, this particular one is extremely technical and goes over many different scenarios. There's a library of drawings, figures, and descriptions for specific features. I will do my best to cover the more interesting topics.

Okay, so let's start from square one. Why is Sony thinking about doing this?

Sony wants to make in-game items unique, presumably because unique items are more valuable and could potentially cost more money. You know that Fortnite cosmetic you just had to buy in order to avoid FOMO? What if that cosmetic were unique to you or at least limited enough not to be widespread...basically like an NFT.

Background:As a result, in traditional video games, there is no way to know, track, or authenticate a history of a particular instance of an in-game item.

The patent makes direct references to collectibles from celebrities or influencers. This reinforces the NFT focus. We've seen many popular sports icons release NFTs, for example, and the same could happen with big streamers or even video game publishers who could "mint" assets.

However, unlike a traditional NFT which is practically an image, these digital assets could actually be usable in a game. Use cases include items, weapons, cosmetics, and actual game save files. Does that sound familiar? Sony had previously patented something that would effectively let users "jump" into another player's save game.

Technical Field: The present technology pertains to tracking digital assets. More specifically, the present technology may provide various techniques for tracking creation of, use of, modification of, and/or transfer of digital assets that are created within a video game and/or that are created based on gameplay of a video game. 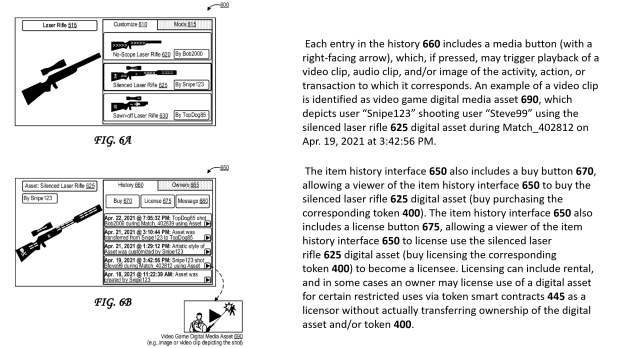 Why does Sony need to track in-game assets? This way the assets themselves could be authenticated and verified for both security and potential value appraisal. Why would an item need to be appraised? The patent specifically mentions a marketplace where gamers can exchange digital assets.

Okay, let's get to the real root of this patent. From my understanding, the biggest reason why Sony would want to do this is to create a bustling economy where gamers would buy, sell, and even rent digital assets.

So why buy something that somebody made? There's a few reasons. The patent outlines various customizations that users could add to their in-game items, and we know a lot of games have randomized mods for specific weapons. Imagine being able to buy that perfect Fallout 76 weapon, for example.

These could be presumably earned in-game (imagine being able to sell a Final Fantasy legendary weapon to somebody else who doesn't want to grind the hours to unlock it, for instance) that are also customized by the player.

Specific metadata properties could also give an item more value. The proposed user interface would display item-specific data like what players were killed by, say, a laser gun. An item that had slain a popular streamer could potentially have more value than another.

It goes deeper. The UI would have an interactive media playback option that shows a video on how the item was used; e.g. how the laser gun was used to kill a streamer like, say, Ninja, for example. 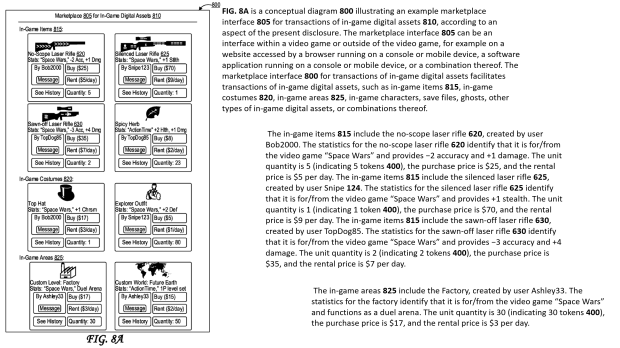 What's also noteworthy is that gamers would be able to license, or rent out, the digital asset that they own. Someone could pay you $5 a day to access an item that you own. Need a more powerful weapon to use against a boss? Rent a legendary sword for a day instead of buying it for $15.

Assets aren't just limited to in-game items, either. They include save files, in-game characters/loadouts, and user-created content like in-game worlds or areas.

Imagine you maxed out your character build and could sell it to someone else online. Or that you made an awesome Elder Scrolls mod that adds a new landmass to the game. You could sell that mod directly to other people as a digital asset or even license it out as a rental.

One thing that probably won't take off is the sale of digital assets as media. The patent notes that videos and screenshots can also be converted into blockchain assets and therefore sold (or rented out) on the marketplace. I don't see anyone paying money for an in-game clip that someone made.

The rest of the patent is fairly technical discussion on how the ledger and blockchain system works, with direct mention of digital asset creation and certification engines.

Remember that this is just a patent and does not indicate any kind of finalized product.