NASA has taken to its blog to share an image that showcases a beautiful side-by-side comparison between the James Webb Space Telescope and the Spitzer Space Telescope's Infrared Array Camera. 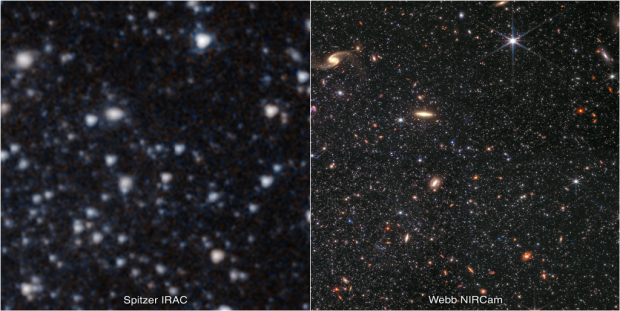 NASA has posted a new blog where it details images of a dwarf galaxy called WLM, which is quite close to our Milky Way galaxy at approximately 3 million light-years from Earth.

NASA spoke with Kristen McQuinn of Rutgers University, one of the lead scientists on Webb Early Release Science (ERS) program that focusses on stellar populations, who explained that WLM is a prime candidate for scientists to test theory theories of galaxy formation as WLM is believed to be barely influenced by other galaxies.

McQuinn describes WLM is isolated, but this is a good quality as many other galaxies are intertwined and entangled with other galaxies, making them harder to study.

"We can see a myriad of individual stars of different colors, sizes, temperatures, ages, and stages of evolution; interesting clouds of nebular gas within the galaxy; foreground stars with Webb's diffraction spikes; and background galaxies with neat features like tidal tails. It's really a gorgeous image.

And, of course, the view is far deeper and better than our eyes could possibly see. Even if you were looking out from a planet in the middle of this galaxy, and even if you could see infrared light, you would need bionic eyes to be able to see what Webb sees," said McQuinn.