A study on climate change and trees titled "The effect of carbon fertilization on naturally regenerated and planted US forests" has been published in the journal Nature Communications. 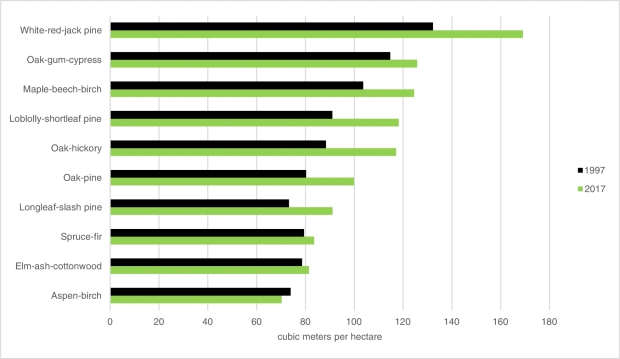 Researchers from the Ohio State University have now determined how much climate change, specifically excess carbon dioxide in the atmosphere, has contributed to the growth of different species of trees. Trees help buffer the effects of climate change on the planet by sequestering carbon dioxide from the atmosphere, which has increased wood volume, or biomass, in a process known as carbon fertilization.

The phenomenon refers to the influx of carbon dioxide into a plant, increasing the rate at which it can photosynthesize to fuel growth, using the sun's energy, water, and other nutrients. Though higher carbon dioxide levels can be detrimental to natural systems and infrastructure worldwide, trees have used this increased availability to grow 20 to 30 percent larger than trees only three decades ago.

"It's well known that when you put a ton of carbon dioxide in the atmosphere, it doesn't stay up there forever. A massive amount of it falls into the oceans, while the rest of it is taken up by trees and wetlands and those kinds of areas," said Brent Sohngen, co-author of the study and professor of environmental and resource economics at The Ohio State University.

"Carbon fertilization certainly makes it cheaper to plant trees, avoid deforestation, or do other activities related to trying to enhance the carbon sink in forests. We should be planting more trees and preserving older ones, because at the end of the day they're probably our best bet for mitigating climate change," Sohngen continued.

A Brief History of the Earth's Climate