A study on the flooding of Mars titled "Layered subsurface in Utopia Basin of Mars revealed by Zhurong rover radar" has been published in the journal Nature. 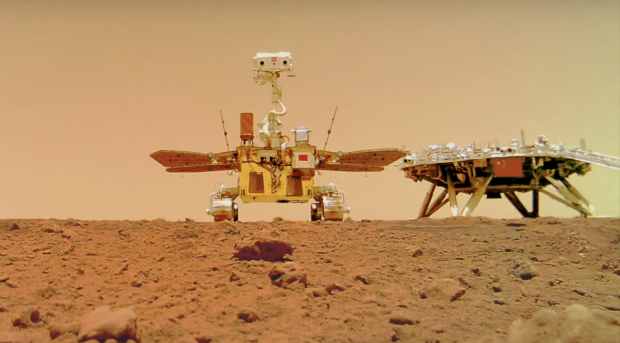 China's Mars rover, Zhurong, has used its radar imager to detect evidence of two major floods that likely shaped the Utopia Planitia region the rover has been exploring since it landed on the Red Planet on May 14th, 2021. Its radar imager can see up to 100 meters (328 feet) below Mars' surface using low-frequency radar waves or between 3 and 10 meters (9.8 to 32.8 feet) below the surface with high-frequency radar waves.

Radar signals reflect off subsurface materials, and the radar data reveals the size and ability of the materials to hold electric charges, with stronger radar signals correlating with larger objects. A layer between 10 and 30 meters below the surface likely contains large boulders near the bottom, with smaller rocks that settled on top, as the reflecting signals were stronger the deeper they went.

Zhurong also surveyed an older, thicker layer between 30 and 80 meters deep. The study authors believe it was formed from rapid flooding that brought sediments into the region over three billion years ago. The upper layer was likely created by another flood 1.6 billion years ago due to glacial activity. The layers are unlikely to be explained by volcanic activity, as the layers have less ability to hold an electric charge and no sudden changes in layering that would be expected from lava flow.