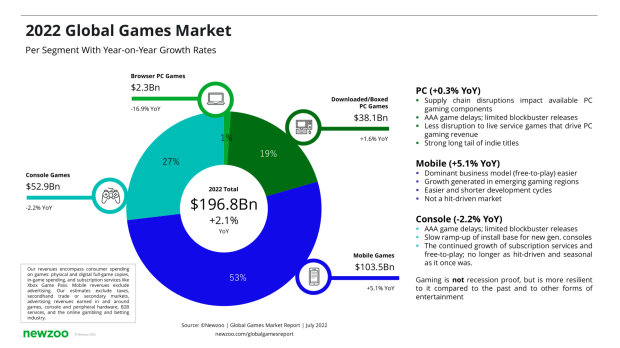 Driven by strong software sales, billion-dollar monetization across all platforms, and new continuing subscription adoption, gaming is getting even closer to the $200 billion revenues mark. According to Newzoo's latest global games market report, the industry is set to make $196.8 billion throughout the year, up 2.1% year-over-year from 2021.

"Because PC revenue is largely generated by live service games, if you look at the top 10 games that are generating revenue for PC, most of them are live service titles. Any disruption or delay in game development hits the PC market relatively less hard than it does the console market. But there is still the effect of game delays to 2023 or 2024 that affects earnings.

"The same is true for supply chain disruptions, if players cannot get their hands-on the latest PC gaming components. That is starting to get better, but there is still more demand than there is supply for many high-end PC gaming components. The simple equation is that if people have new hardware, they tend to buy more software, but if they cannot get their hands-on new hardware, they tend to spend less on new software.

"Moving on to console, it's an extension of the same story. We expect console to decline slightly this year just minus 2.2% growth, still generating almost $53 billion a year and more than a quarter of games revenue. So a very healthy market, but not the best year for console. There's three main drivers for that: first of all we don't have as many blockbuster releases as we had in the past years, and also as opposed to PC gaming and mobile gaming, console is a hit-driven market--less so than it has been in the past because of live services, because of DLC, and in-game spending, but still more so than PC or mobile gaming.

"So fewer hits means less spending on console games. The same is happening here. Because the new consoles from Sony and Microsoft are still hard to purchase, that supply has yet to catch up with demand, it means the install base is lower now than it would be if all was going normally. So there's a slow ramp of the install base and if the people don't have the new consoles they're not buying content for the console.

"What is offsetting some of these declining factors is the continued growth of subscription services and free-to-play console games.

"Besides all that, it's still a growing market. Free-to-play is the dominant business model that makes converting new players easier when facing inflation." 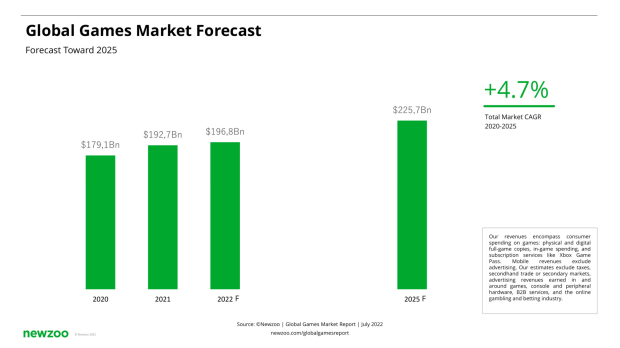