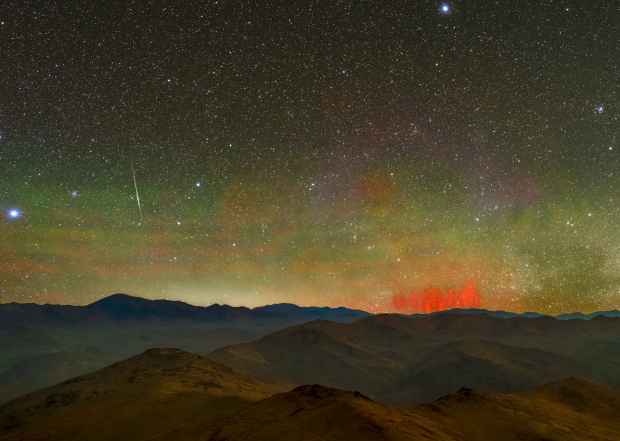 Red sprites are large-scale electric discharges, similar to lightning, that occur high above thunderstorm clouds, about 50 to 90 kilometers (31 to 56 miles) into the atmosphere. They often occur in clusters, appearing as bright red-orange flashes that are sometimes mistakenly called upper-atmospheric lightning. However, they aren't as hot as true tropospheric lightning and are more like the discharges within fluorescent tube lights.

The above photo, taken by the ESO's 3.6-meter (11.8 feet) telescope at the La Silla Observatory, shows red sprites appearing rather low in the sky, though this is only due to the camera's perspective. The rest of the sky takes on a green hue, which is the result of a phenomenon known as airglow, where the atmosphere itself emits a faint amount of light. It is usually only noticeable in very dark skies with little light pollution. It results from electrons recombining with nitrogen and oxygen atoms at night after sunlight splits them apart during the day. 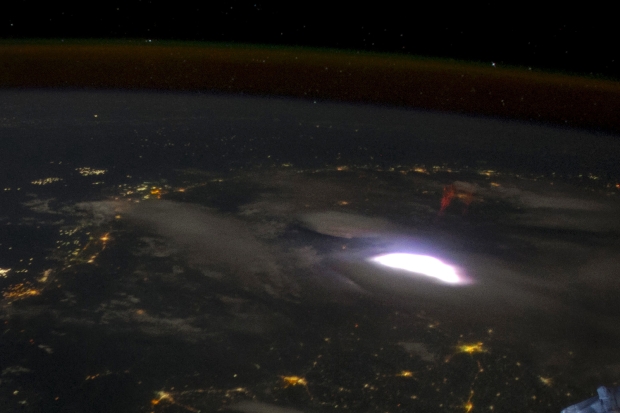 Though red sprites require specific conditions to form and be captured, they have been observed numerous times at this point, with astronauts aboard the International Space Station (ISS) even managing to snap a photograph. The image from the space station shows a bright glow beneath the red sprite, likely from an accompanying lightning discharge. Red sprites are typically triggered above thunderclouds by a positive lightning discharge toward the ground from beneath the underlying thundercloud. 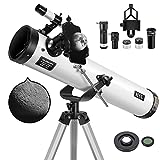