A study on the new material titled "Electrical control of glass-like dynamics in vanadium dioxide for data storage and processing" has been published in the journal Nature Electronics. 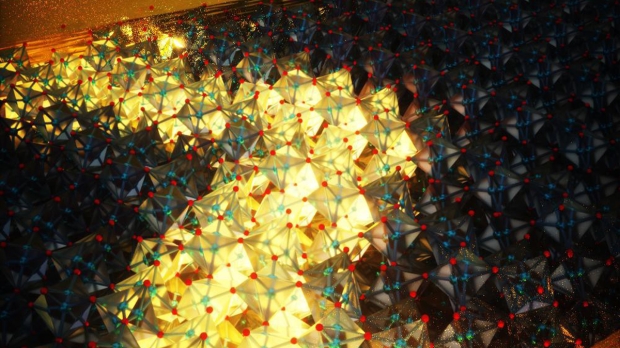 Researchers from the Ecole Polytechnique Federale de Lausanne (EPFL) were experimenting with vanadium dioxide (VO2), a material used in electronics, and its transition between phases. In doing so, they made a chance discovery that shows the compound can "remember" the entire history of external stimuli that have affected it.

VO2 exists as an insulator at room temperature but quickly transitions into a metal at 68 degrees Celsius (154.4 degrees Fahrenheit), and Ph.D. student Mohammad Samizadeh Nikoo at EPFL's Power and Wide-band-gap Electronics Research Laboratory (POWERlab) was investigating how long it takes for VO2 to transition between states. Applying an electric current to a sample of VO2 causes its lattice structure to change as it transitions between states, and removing this current causes it to revert to its initial state.

The electrical current makes its way through the material, heating it as it goes and finding a path to the other side. However, Nikoo noticed that after applying a second pulse of electrical current, the time the VO2 took to change state was affected by the previous phase transition. This form of memory persisted for up to three hours, though the researchers believe it could continue for several days, though they don't have the instruments they would need to measure it.

"The VO2 seemed to 'remember' the first phase transition and anticipate the next. We didn't expect to see this kind of memory effect, and it has nothing to do with electronic states but rather with the physical structure of the material. It's a novel discovery: no other material behaves in this way," explained Professor Elison Matioli, who heads the POWERlab.

The Complete Guide to Memory: The Science of Strengthening Your Mind