However, not unlike the usual approach Bose takes, the HD50's are all about quality and power packed into a small unit; though that's not to say these would be in any way shape or form comparable given the market and price point they're set at.

The tweeter Creative has chosen to use on these speakers is a 'Titanium Super Tweeter' which promises a complete audio experience whilst the system also sports BasXPort which is designed to produce a more powerful bass output without the use of a subwoofer.

The speakers are expected to hit shelves with an RRP of 149 (around $220 USD) which is quite steep indeed for a set of small stereo speakers, so you'd want to know that Creative's claims about their performance is more than just marketing hype. 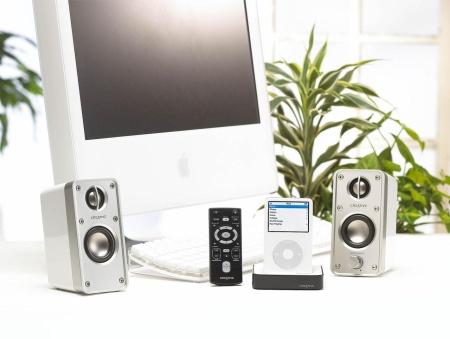 Creative, a worldwide leader in digital entertainment products, announces GigaWorks HD50 speakers, the perfect choice for pure music listening when space is limited but the quality requirement is not. Anyone who demands top-quality music with any PC, notebook or MP3 player will love the way these ultra-compact and great-looking two-piece speakers deliver it. As part of Creative's GigaWorks high-end speaker family, they come with the assurance of state-of-the-art engineering for supreme performance.

GigaWorks HD50 speakers are designed to deliver truly 'big' sound in a remarkably small footprint, so users can enjoy all their music without compromising on quality or desktop area. Each satellite contains a Titanium Super Tweeter for sweeter high notes, augmented by a two-inch High Definition Driver for high energy and solid bass plus BasXPort technology for additional low-frequency strength. Together, these features create an amazingly realistic sound 'picture' all the way from the highest treble, through the important mid range, and down to a deep bass.