Researchers have taken a decapitated Egyptian mummy head and performed a CT scan revealing clues about its origin. 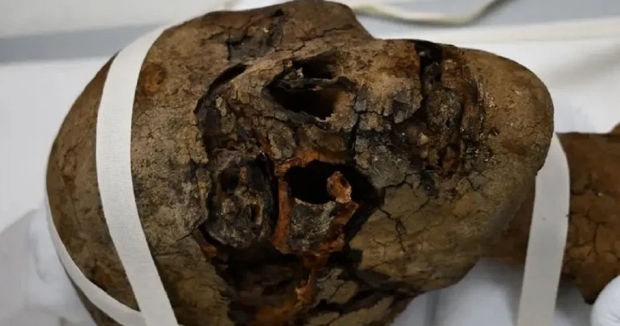 The decapitated head was found in an attic in Kent, England, and has recently been put under a CT scan that revealed it's at least 2,000 years old. Preliminary results from X-ray scans performed at Canterbury Christ Church University found that the head was once an adult female, which was then followed up by CT scans at the Maidstone Hospital that revealed the woman had a poor diet as her teeth were worn down.

"The head was found in the attic of a house in Kent which was being cleared out following the death of the owner. During the Victorian times, items like this used to be brought back from Egypt as souvenirs and may well have been passed down through generations to the person who owned it." said James Elliott, a diagnostic radiography lecturer at Canterbury Christ Church University and senior radiographer at Maidstone and Tunbridge Wells NHS Trust.

"It is believed that the brother got it from a 'Dr Coates' sometime in the early/mid twentieth century, but we do not have any more detail than that. The scan provides a huge amount of information - everything from dental status, pathologies, method of preservation as well as assisting estimations of age and sex," said Elliott.

As for how the decapitated head got into the attic, reports indicate that the head was found by a man who inherited it from his brother, who received it from "Dr. Coates," who gave it to him during the early/mid-twentieth century. The head was found following the death of its owner, and according to James Elliot, the lead researcher that scanned the skull, it was likely brought back from Egypt during the Victorian times as a souvenir and was likely passed down by generations through the owning family.

The head has been given to the Canterbury Museums and Galleries collection, where it will remain in a glass case for observation and further testing. With the data from the scans, the team of researchers plans on creating a three-dimensional replica of the skull as well as possible facial reconstruction.

A recreation of the decapitated head will allow for researchers to develop a deeper understanding of ancient Egyptian traditions and the reasons behind an adult female having her head a brain removed for preservation.