A study on the new phase of matter titled "Dynamical topological phase realized in a trapped-ion quantum simulator" has been published in the journal Nature. 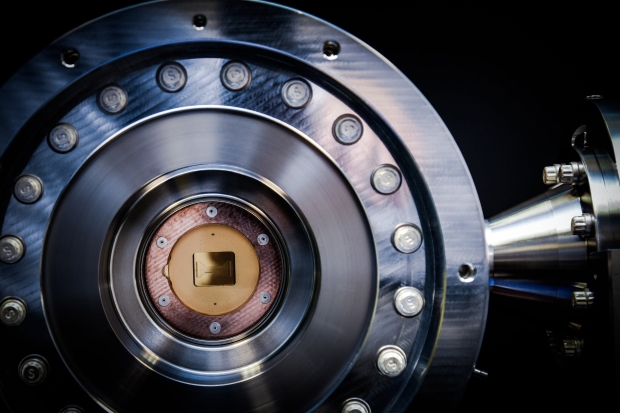 An international team of researchers has fired a specific sequence of laser pulses at atoms in a quantum computer, causing them to adopt a never-before-seen phase of matter. The quantum computer's ten atoms, ions of ytterbium, acquired an "extra" time dimension. The laser pulse sequence used on the atoms was inspired by Fibonacci numbers, the sequence of numbers that starts with 0, then 1, and the next number is the sum of the previous two, resulting in 0, 1, 1, 2, 3, 5, 8, and so on.

The ytterbium ions in the quantum computer serve as quantum bits, or qubits. These qubits store information much more information than traditional bits in conventional computers, with a qubit existing as either a 0 or 1, like a traditional bit, or any combination of the two, in what's known as a superposition. However, upon observation, a qubit must become either a 0 or 1, so researchers have sought to make qubits more robust by adding "symmetries," which make them more resistant to change.

"Even if you keep all the atoms under tight control, they can lose their quantumness by talking to their environment, heating up or interacting with things in ways you didn't plan. In practice, experimental devices have many sources of error that can degrade coherence after just a few laser pulses," said study lead author Philipp Dumitrescu.

For example, snowflakes have rotational symmetry and appear the same to observers after being rotated 60 degrees. The researchers planned to add one symmetry to the atoms using time by hitting them with rhythmic laser pulses. However, they realized they could go further and achieve two time symmetries by using a non-repeating, or quasi-periodic, laser pulse, such as one following the Fibonacci sequence, which is known and ordered but not repeating.

This allows the atoms to take on an additional time symmetry, acquired from a non-existent extra time dimension. Testing the approach on Quantinuum's quantum computer with a periodic laser pulse resulted in qubits remaining in a quantum state for 1.5 seconds despite interacting with other qubits. When testing the quasi-periodic pattern, the qubits stayed in a quantum state for the entire duration of the experiment, about 5.5 seconds.

"With this quasi-periodic sequence, there's a complicated evolution that cancels out all the errors that live on the edge. Because of that, the edge stays quantum-mechanically coherent much, much longer than you'd expect," said Dumitrescu.

For further explanation, check out this press release from the Simons Foundation. You can read more from the study here.