A farm in Lampang, Thailand, is experimenting with feeding its free-range chickens cannabis as an alternative to antibiotics. 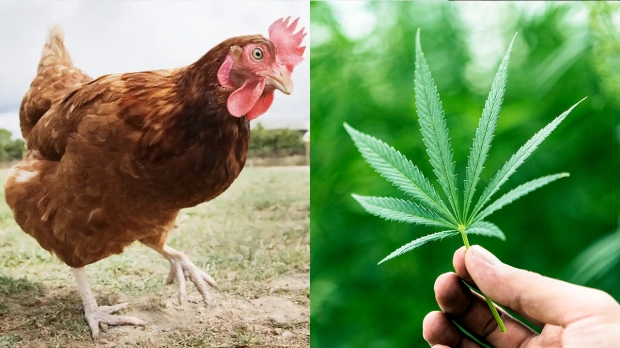 Researchers from the Department of Animal and Aquatic Sciences at Chiang Mai University have been studying the experiment's results, which has been running since January 2021. Less than ten percent of the 1,000 chickens on the farm have died since the dietary change, matching the mortality rate of prior seasons where no severe outbreaks of disease threatened the flock.

Crushed cannabis is added to the chickens' feed and water while medicines and antibiotics have been taken out of their diet, allowing the farm to sell their meat as organic poultry for higher prices. Consumers looking for chickens that weren't fed antibiotics are paying about $1.50 per pound for the organic alternative, about double the usual cost. The product has been called "GanjaChicken," and is allegedly more tender and better tasting.

"Consumers in Thailand have been paying attention to this because demand is increasing for chickens and many farmers have to use antibiotics. So some customers want to find a safer product," said Chompunut Lumsangkul, the assistant professor who led the study.

"I can't say the cannabis doesn't let the chickens get high, but they exhibit normal behavior," Lumsangkul added.

Cannabis Is Medicine: How Medical Cannabis and CBD Are Healing