Andrew McCarthy has captured an image of the International Space Station (ISS) as it transits across the Moon.

Using a camera capturing at a rate of 155 frames per second, McCarthy created a video of the space station transiting across the lunar surface, with the Eratosthenes, Copernicus, Kepler, and Aristarchus craters all visible beneath it. The video is slowed down by about 12 times, as the ISS was only in frame for roughly a quarter of a second. McCarthy woke up at 1:30 am to capture the image, with both the Moon and ISS lit by the Sun.

The full-size image showing the majority of the Moon with the ISS transiting between the camera and the Moon is a mosaic compiled from smaller images making up the rest of the scene. A secondary camera captured the color data, and the image itself is available for purchase as a print on McCarthy's website.

A blog post on McCarthy's website describes in further detail how he identified when the transit would be visible, and how he takes similar shots. 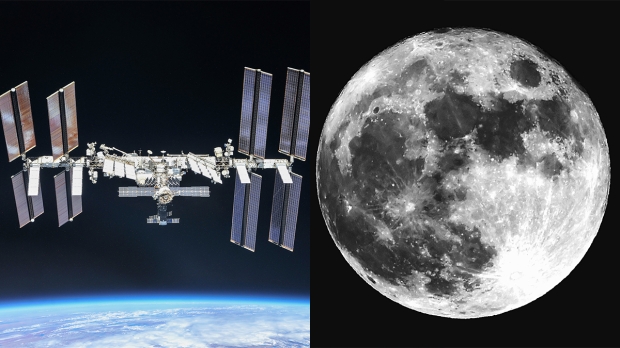