In an exclusive reveal with IGN, Amazon Prime Video has revealed what the orcs will look like in the upcoming "The Lord of the Rings: The Rings of Power".

Peter Jackson's Lord of the Rings trilogy made a point of using prosthetics and practical effects when designing the orcs, which is a large part of why the movies have aged so well. Jackson switched to CGI effects in The Hobbit trilogy, which wasn't particularly welcomed by Tolkien fans. Now that Amazon has a new Lord of the Rings TV show in the works, fans have been itching to know if the orcs, or the show in general, will be CGI-focused or use practical effects like the original trilogy.

In an exclusive interview with IGN, executive producer Lindsey Weber and prosthetics department chief Jamie Wilson revealed that the show will be taking the practical effects and prosthetic route for their orcs of Middle-Earth, and that visual effects or CGI will only be used when there is an overwhelming number of orcs. Weber explains that when an orc is close to the camera, it will almost be entirely comprised of practical effects.

"When they are up close to the camera, Orcs are really practical and almost exclusively. And the places where the visual effects team help were in more numbers when we need larger quantities than you could amass on a film set anywhere in the world. That's what they sort of, when they come in and do some of, work their magic. We did a lot of planning so that we knew in advance which performers would be closest to camera," Weber said.

Wilson explained that there are "a lot" of visual effects in the show when characters are performing stunts and actions that a human "physically can't do" and that fans can expect "a lot of that".

Notably, Wilson and Weber pointed out that a lot of the prosthetics work was done on beasts and creatures of Middle-Earth and that the production team worked really hard to make the prosthetics comfortable for the performers, which is a call back to the notoriously difficult prosthetics Peter Jackson's Lord of the Rings cast had to go through - specifically the Hobbit actors and their daily feet treatment.

"We [worked] really hard to make our prosthetics really thin and more comfortable for our performers and all of that. But there are times when they're wearing things, teeth for example, and all sorts of other stuff that do make that hard. And over time, as you're shooting, those things can just take on a little wear and tear as the day goes along," Weber added.

The executive producers also revealed that Tolkien fans will be able to see female orcs for the first time. The first season of Amazon's The Lord of the Rings: The Rings of Power will debut on September 2, 2022. 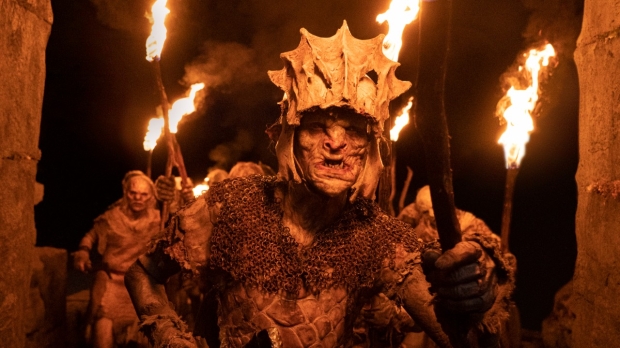 Monopoly: The Lord of The Rings Edition Board Game