Ford's new F-150 Lightning is a beast of an electric truck, with the huge battery inside of the F-150 Lightning capable of charging up an empty Tesla... acting as a portable Supercharger.

The reality of re-charging a Tesla started with F-150 Lightning owners posting on a forum, using the J1772 Adapter for Tesla vehicles, which is sold by EV charging company, Lentz. There are reports that the Ford F-150 Lightning actually includes a free Tesla charging adapter, which is a dig at Tesla obviously.

Most vehicles have the standard J1772 charging connector, but Tesla uses a proprietary connector that works with its Supercharger network. Ford owners laughed, talking smack on forums with comments like "we can help all those poor dead Teslas" and "I'll add a bumper sticker 'Tesla Rescue Squad'".

Ford "F-150 Lightning can charge other EVs using its bi-directional charging capability and we're shipping our first Lightnings with adapters so F-150 Lightning customers can lend a hand if needed".

Ford offers a Pro Power Onboard upgrade for its F-150 Lightning electric truck, with the company detailing it: "Pro Power Onboard is a more sophisticated, integrated solution than a traditional generator. With tech-safe precautions and ground-fault detection, you can hook up your most essential tools on the worksite or be the talk of the tailgate when watching the big game".

But then there's a feature called Ford Intelligent Backup Power, which when plugged into the Ford Charge Station Pro home charger -- which comes standard with the extended range version of the F-150 Lightning by the way -- the F-150 Lightning will begin charging your house. Ford says that the F-150 Lightning is good to charge the average home for 3 entire days with the 9.6-kilowatt Pro Power Onboard system. 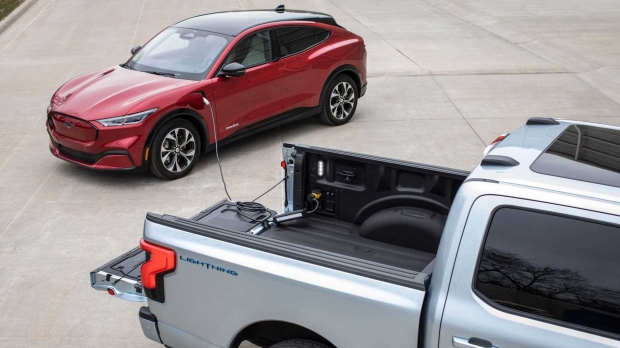