How difficult is it to find legendary gems in Diablo Immortal? Pretty tough. Here are the drop rates for legendary gems, and how much you may have to pay to get them. 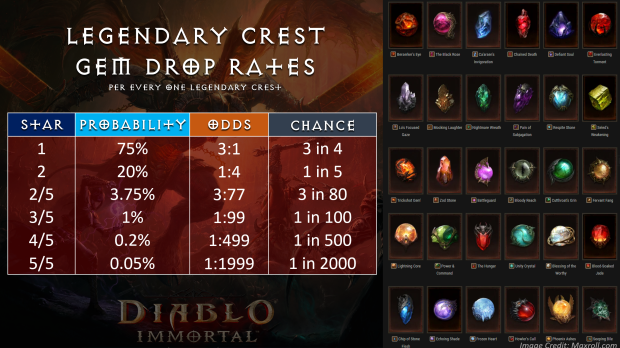 Diablo Immortal's microtransactions are causing lots of controversy among core fans and newcomers alike. The endgame has been exposed as an incredibly layered pay-to-win style system wherein players are strongly pushed towards buying Legendary Crests for real money in order to find high-powered gems that can boost items and equipment. While not entirely necessary for PVE, winning PVP battles is largely determined by the extra buffs provided by these specific gems.

The legendary gems are exceedingly rare and come in multiple grades, ranging from 1-star to 5-star. Gamers have compiled a list of drop rate probabilities for each grade, and we've put that into a simple table for convenience.

This is by no means definitive and is based on math and information provided by the community. The results are interesting to say the least...and not in a good way. The probability rates are based around information passed to YouTuber Gregg2g and those compiled by players on various forums and social media channels.