Diablo Immortal is indeed an intensely grindy, pay-to-win F2P game with intricately-designed layers of monetization. One YouTuber has uncovered the odds of endgame progress, and they're not good.

Diablo Immortal's endgame is gated off by a big paywall. The probability and chances of progression are so low for free-to-play users that it's almost entirely necessary to spend money unlocking Legendary Crests, which infuse Elder Rifts--special portals to enemy zones--with guaranteed chances of finding an endgame Legendary Gem.

So what makes Diablo Immortal's monetization so incredibly controversial? The short answer: An infinite RNG system based around astronomically bad odds. YouTuber Gregg2G did an excellent breakdown on Diablo Immortal's progression and microtransaction systems, complete with probabilities provided by whale-trackers. 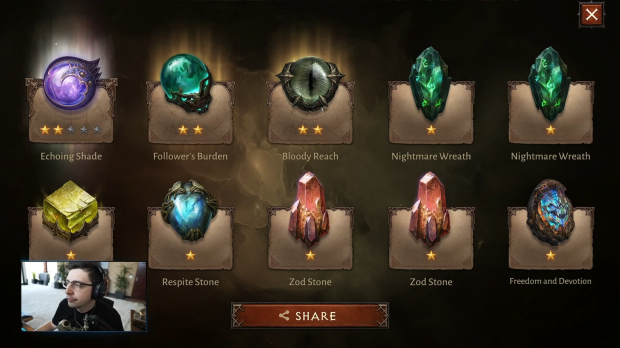 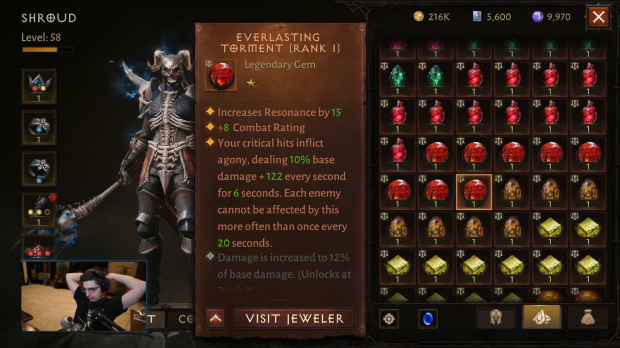 "Your power in this game comes from three places: your level, equipment, and legendary gems. Legendary gems is part of this puzzle."

"Legendary Gems. They're the main source of pay-to-win in Diablo Immortal. They can be found in Elder Rifts, and only if you have Legendary Crests or Rare Crests, which you can use to empower the rift. You can buy unlimited Legendary Crests in the shop with Eternal Orbs, a currency that must be paid for, for a 100% chance at a Legendary Gem drop. There are virtually no sources for earning Legendary Crests for free."

"You cannot get 5-star Legendary Gem drops from Rare Crests. So most free-to-play players will never see a 5-star gem; F2P gamers do get a few Legendary Crests here and there, but a few isn't going to get you much due to the probabilities." 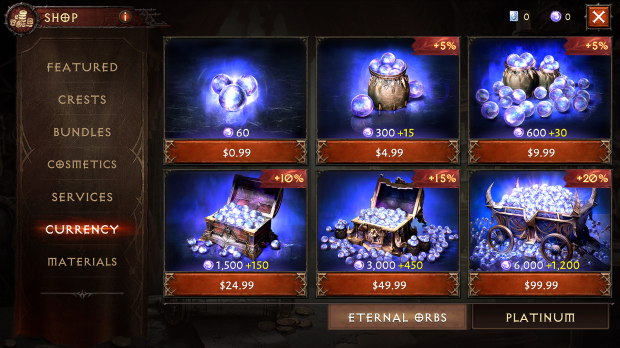 So $100 would get you 45 legendary crests if you purchase the $99.99 Eternal Orb bundle. That's 45 Legendary Gems, but the probability they will be 5-star grades are very low. 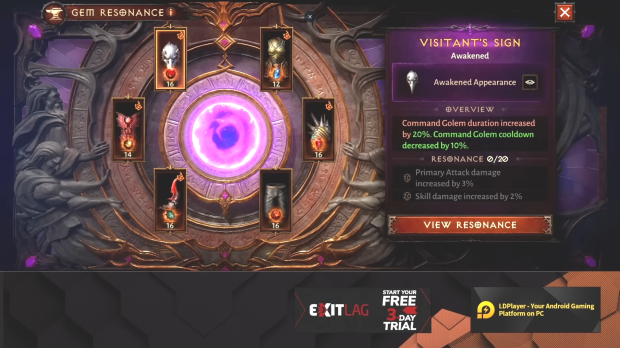 It gets worse. Diablo Immortal's resonance system is described as a "giga-whale" monetization system that ultimately feeds a never-ending endgame grind.

"You got your six legendary gems ranked up, and your set, but you didn't think you were done, did you?"

"Long story short, you add gems to other gems to get even more bonus stats. Not just any gems, though. They have to be specific gems." 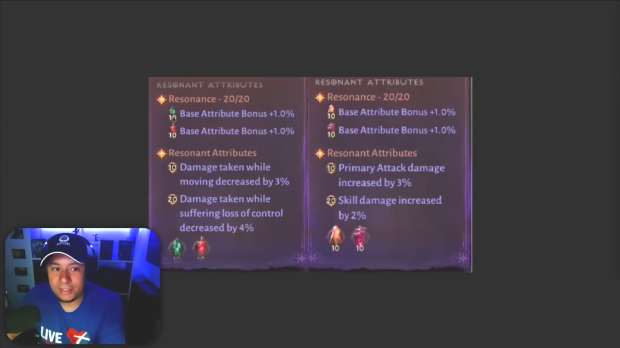 Not all gems are even usuable or desirable for certain characters. For example, you'd never use a Trickshot Gem on a Necromancer because it doesn't provide any benefits.

"1-star gems get two sockets for gem-ception, 2-star gems get 3 sockets, and 5-star gems get 5 sockets. If you want to be a giga-whale, you're going to be leveling up a total of 36 legendary gems. These require specific gems. Some of the sockets require 5-star gems."

"For 1-star gems, you get 20 points of Resonance, each point being directly related to the gem inside of it." 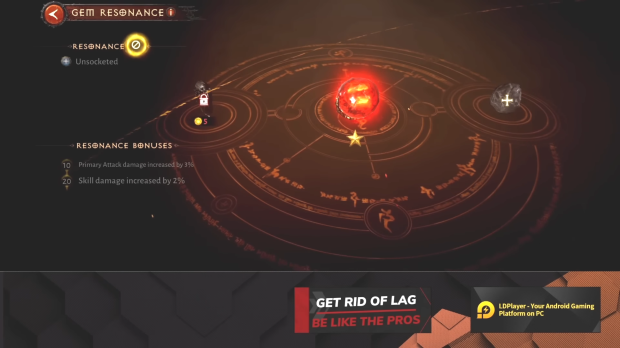 Resonance is basically the ultra endgame activity where you socket gems into a master gem to add more effects. You're literally socketing gems inside of gems. For a Diablo 2 player like myself, this is definitely gem-ception.

Gems are now actual pieces of gear that go inside your gear.

So you have a 5-star gem you want to upgrade. Players "awaken" the gem, and then can put other gems inside of it for extra bonuses. A 5-star gem has five slots, or sockets, and five other gems can be added to provide more effects. You can also socket 5-star gems into other 5-star gems to provide considerably larger bonuses.

Remember that Legendary Gems have star-based grades. The quality of the effect is based on the gem's grade. A 2-star gem, for example, will boost an effect by 2% at rank 10.

The trend is clear: The complexly-layered monetization system is designed to significantly incentivize unlocking 5-star gems, which can mostly only be found when using Legendary Crests on Elder Rifts. The probability that you'll find one 5-star gem is very low, but the chances of you finding 5 of them that all fit your build are just astronomically out of your favor. 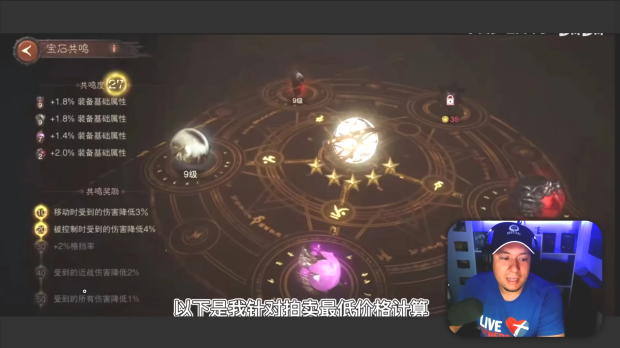 "You're going to be paying thousands and thousands of dollars to rank up 5-star gems to put in your 1x 5-star gem. Keep in mind we're only talking about just one piece of equipment this whole time. We're just talking about one. If you want to have all six of your pieces filled in...we're talking a total of 18x 5-star gems to rank 10. But yeah, the 18x 5-star gems, you're looking at six figures at least. If RNG is not on your side, you could be looking at seven figures to become the ultra mega-whale."

Cosmetics are also part of the resonance system. Each series of gems that get upgraded will change the appearance of your gear.

"I think Diablo Immortal has taken the pay-to-win to a level I've never seen before. I've played a lot of mobile games and I've seen a lot of shit. But this right here takes the cake." 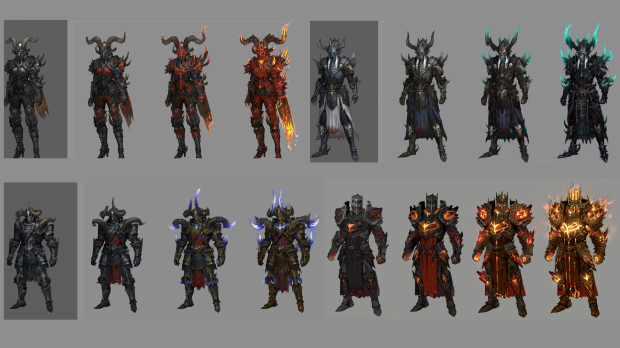 As you start to level up your Legendary Gems, you'll also see their growing power reflected in your gear. Every Legendary item in the game has its own unique visual progress to accompany your gems' growing Resonance. At the highest levels of your Resonance stat, you'll even unlock cosmetic wings.

Shroud goes on to say this game could cost $500,000 to fully max out a character.

Diablo Immortal was developed alongside NetEase, a Chinese gaming juggernaut that made over $9.8 billion from microtransactions in free-to-play mobile and browser games. It's highly unlikely Diablo Immortal's monetization will change one iota unless it is made to by international and domestic regulations.