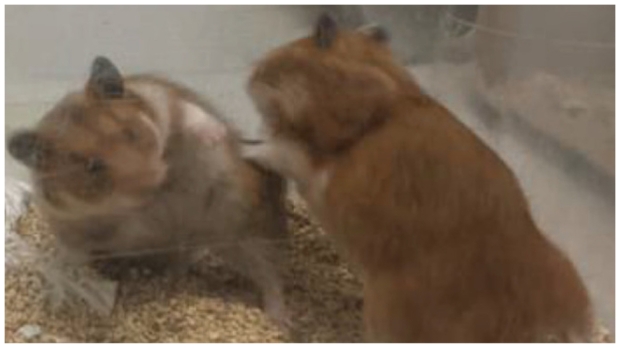 The team of researchers writes in their study that they used CRISPR gene editing technology to remove a receptor, Avpr1as, for a naturally occurring hormone called vasopressin. The gene and the hormone are designed to regulate levels of teamwork and reduce social barriers. The team was able to determine that the two hamsters the test was performed on were without the gene receptor and the hormone by performing full scans on the subjects' brains.

The researchers expected that the removal of the gene/hormone would mean the hamsters wouldn't regulate their kindness towards each other and become extremely friendly, docile, and basically non-violent. Unfortunately, the polar opposite happened as both of the hamsters exhibited extreme communication with each other, became very territorial, and showed high levels of aggression toward hamsters of the same sex.

"We produced Syrian hamsters that completely lack Avpr1as (Avpr1a knockout [KO] hamsters) using the CRISPR-Cas9 system to more fully examine the role of Avpr1a in the expression of social behaviors. We confirmed the absence of Avpr1as in these hamsters by demonstrating 1) a complete lack of Avpr1a-specific receptor binding throughout the brain, 2) a behavioral insensitivity to centrally administered AVP, and 3) an absence of the well-known blood-pressure response produced by activating Avpr1as. Unexpectedly, however, Avpr1a KO hamsters displayed more social communication behavior and aggression toward same-sex conspecifics than did their wild-type (WT) littermates," wrote the researchers.