The new ASRock Radeon RX 6950 XT OC Formula graphics card has a GPU Boost CLock of up to 2495MHz, but we'll see it breach 2800MHz and I'm sure 3000MHz+ with professional overclockers and LN2 cooling. ASRock says that its newly designed Striped Ring Fan "further enhances the airflow performance with its striped fan blades and ring structure".

Underneath we have AMD's latest Navi 21 KXTX GPU, upgraded 16GB of GDDR6 memory that's clocked at 18Gbps (up from 16Gbps) while ASRock is including some built-in ARGB LED lighting that syncs with ASRock motherboards through Polychrome SYNC support. 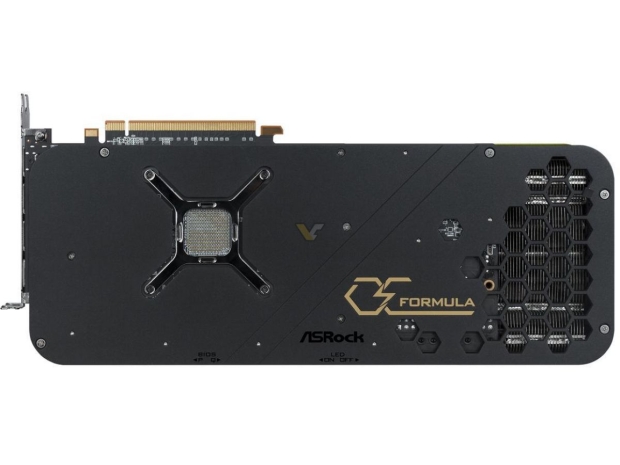 It's a chunky, chunky card -- just like the previous ASRock RX 6900 XT OC Formula -- with 3 x 8-pin PCIe power connectors required, and a huge triple-fan cooler that should keep the Navi 21 KXTX + 16GB of GDDR6 @ 18Gbps nice and cool, even when overclocked.