Have you ever wondered what a bullet from a 9mm would look like flying through an egg? The Slow Motion Guys have captured that in staggering amounts of frames per second.

In a new video released to The Slow Mo Guys YouTube channel, Gav and Dan revisit a video that was uploaded to the channel 11 years ago where Gav demonstrated the difference in frames rates by writing on the mugs and shooting at the respective numbers. The highest frame rate in that 11 year old video was 10,000, and is where the egg shooting video begins with the maximum recorded frame rate being 1 million frames per second (FPS).

The eggs are positioned in the same location and a 9mm bullet is fired. The slow motion camera records the impact and each level of frame rate showed revealed different aspects of the collision. At the higher frame rates the bullets wobble from piercing through the egg can be more clearly seen, and moving into the 100,000's of FPS smaller pieces of shell can be seen as well as the shadow from the shockwave of air. 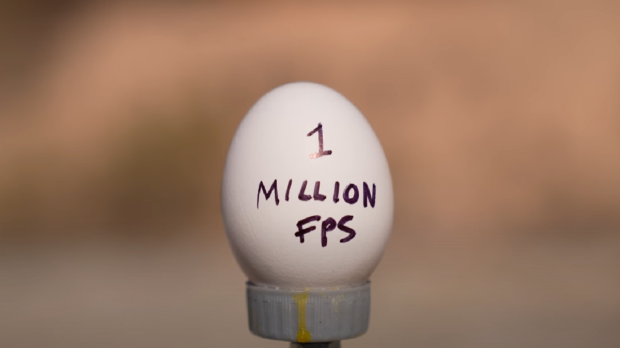