The US Naval Institute (USNI) learned that Russia was using dolphins to protect its navy in the Black Sea. The reports were confirmed by satellite images. 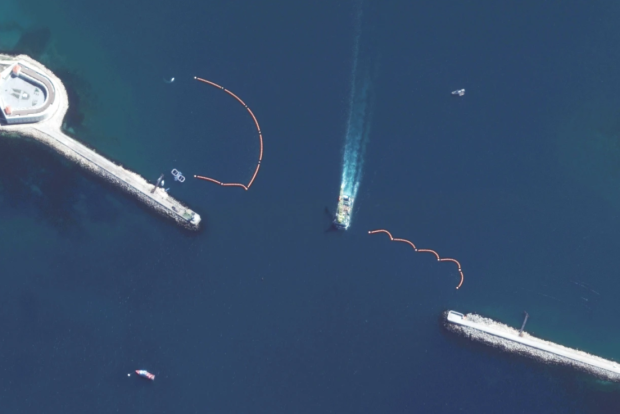 New satellite images from Maxar Technologies reveal what is being reported as dolphin pens located at the entrance of a key port in the Black Sea. According to the USNI website, there are two dolphin pens that were moved to the harbor in February and contain trained dolphins that are most likely there to prevent any Ukrainian divers from entering the harbor to destroy any ships.

The images were analyzed by H I Sutton, who specialized in marine mammal pens and wrote for the USNI. Sutton said that dolphins were "the most obvious type of mammal" that Russia would be using to protect its navy fleet. Sutton went on to say that Russia has previously used dolphins in war and recounted that the Kremlin deployed them in Syria in 2018 to counter enemy divers, gather objects from the seabed, and conduct military intelligence operations.

Notably, a spokesperson for Maxar Technologies backed up the analysis by the UNSI, saying he "agreed with the analytic assessments made by our partners at the USNI."

If you are interested in learning more about how dolphins are used by humans for military purposes, check out this link here.