Call of Duty players will soon face off against colossal movie monsters in a battle that could shape the future of Caldera.

If Activision can pull it off, Call of Duty's new Operation Monarch might be the most epic live event in the history of gaming. Starting on May 11, gamers will face off against King Kong and Godzilla as they rampage the Pacific island-map of Caldera.

Activision says players "will need all the power they can get their hands-on to combat Godzilla and Kong, laying siege to Caldera later in the season with the limited-time event, Operation Monarch."

Exact details are unknown, but we do know Operation Monarch will be a part of Season 3 Classified Arms (coming to Vanguard on April 26, and Warzone on April 27). We could see a huge 100-player PvPvE event where two film titans attempt to each other, the squadrons of players, and the entire island itself.

Caldera has been updated with a new point of interest where gamers will uncover environmental storytelling like gigantic animal fossils and bones--not to mention an "otherworldly axe". There's also a huge runestone straight out of a sci-fi horror story. 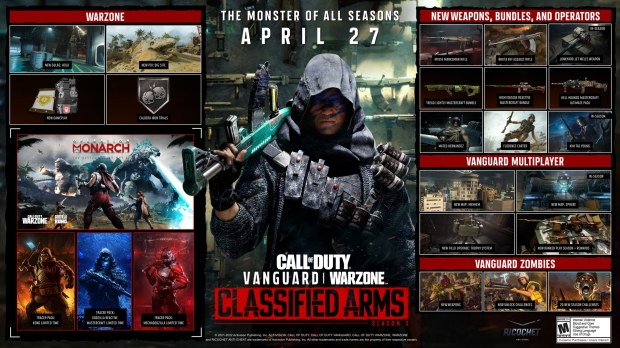 Giant skulls and rebuilt defenses are just two of the many clues towards what will come with Operation Monarch, a special limited-time event featuring the iconic Titans of the Monsterverse, Godzilla and Kong.

Along with bringing two of the largest stars in movie history to Call of Duty®, Operation Monarch will introduce a new game mode for Quads based on several classic experiences with a titan-sized twist.

While Operation Monarch won't begin until 9 AM PT May 11, be on the lookout for the presence of ancient artifacts, Monarch Research equipment and tents, as well as...well, it won't take much investigating to see the massive glowing axe jutting out of the ground right near the Resort.