Studies on the galaxy titled "A Search for H-Dropout Lyman Break Galaxies at z~12-16" and "Are the Newly-Discovered z∼13 Drop-out Sources Starburst Galaxies or Quasars?" have been published in the Astrophysical Journal and Monthly Notices of the Royal Astronomical Society Letters, respectively. 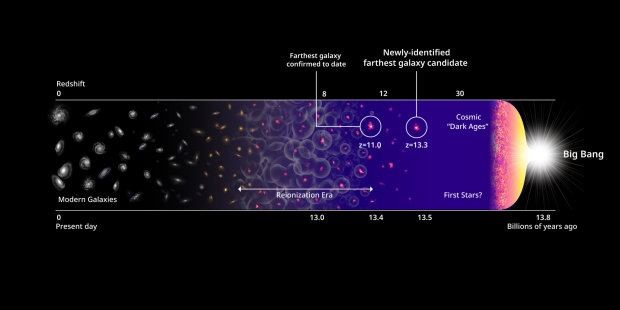 Researchers have spotted HD1, a galaxy candidate approximately 13.5 billion light-years away from Earth. Two theories have been suggested regarding HD1; that it could be forming stars at a very high rate, potentially Population III stars (the first stars to be born in the universe, which have yet to be observed), or that HD1 may contain a supermassive black hole 100 million times the mass of our Sun.

"The very first population of stars that formed in the universe were more massive, more luminous and hotter than modern stars. If we assume the stars produced in HD1 are these first, or Population III, stars, then its properties could be explained more easily. In fact, Population III stars are capable of producing more UV light than normal stars, which could clarify the extreme ultraviolet luminosity of HD1," said Fabio Pacucci, lead author of the MNRAS study.

The international research team discovered HD1 following over 1,200 hours of observing time using various telescopes. Once operational, the team will use the James Webb Space Telescope to observe HD1 and confirm its distance, which, if true, confirms it to be the most distant and oldest galaxy ever found.