All NewsBusiness, Financial & LegalCases, Cooling & PSUContests & GiveawaysCPU, APU & ChipsetsDealsDisplays & ProjectorsGamingMotherboardsScience, Space & RoboticsStorageVideo CardsVirtual & Augmented Reality
All ReviewsAll ArticlesAudio, Sound & SpeakersCases, Cooling & PSUCPUs, Chipsets & SoCsComputer SystemsDisplays & ProjectorsGamingMotherboardsNetworkingPeripheralsRAMStorageVideo Cards
GuidesGamingAsk the ExpertsNewsletterAboutForums
RTX 3090 TiRTX 4090Diablo 2GTA 6Halo InfiniteElon MuskRTX 3080HDMI 2.1
E-ten has been busy over the last couple of weeks as it has just launched a third Windows Mobil 6 device today, the Glofiish M800. Think of it as the X800 with a keyboard and that's the M800. Although it's not quite that simple of course, since there are some other slight differences between the two.

The M800 features the same Samsung S3C2442 500MHz CPU and it has 256MB of Flash ROM as well as 64MB RAM. There's a micro SD card slot for further memory expansion. The touch screen measures 2.8-inches and has VGA resolution at 480x640 which is a feature that we're really keen on when it comes to Windows Mobile devices. 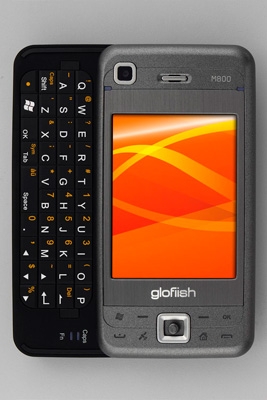 It also sports 802.11b/g Wi-Fi, Bluetooth 2.0 with EDR and a built in SiRF Star III GPS receiver. You'll also find a rear mounted 2Megapixel camera with an LED flash and a front mounted camera for video calls. All in all this looks like a very competitive device if the price is right. At US$749.95 it seems to be about US$50 cheaper than the HTC TyTN II, although this comes with 128MB of RAM and a 3Megapixel camera, but a lower resolution display,

Although it's not yet up on E-ten's website, you can already order it from Expansys here
Newsletter Subscription