A study on the star system titled "The Physical Properties of the SVS 13 Protobinary System: Two Circumstellar Disks and a Spiraling Circumbinary Disk in the Making" has been accepted for publication into The Astrophysical Journal. 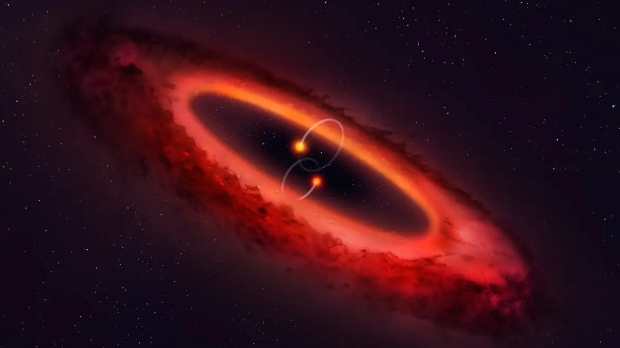 The binary star system is called SVS 13 and is located 980 light-years away from Earth. After a star is born, the leftover dust and gas form a protoplanetary disk, which can then produce planets, asteroids, comets, moons, or various other kinds of celestial bodies. Astronomers have now observed three such protoplanetary disks forming around SVS 13.

"Our results have revealed that each star has a disk of gas and dust around it and that, in addition, a larger disk is forming around both stars.This outer disk shows a spiral structure that is feeding matter into the individual disks, and in all of them planetary systems could form in the future. This is clear evidence for the presence of disks around both stars and the existence of a common disk in a binary system," said astronomer Ana Karla Diaz-Rodriguez of the Institute of Astrophysics of Andalusia (IAA-CSIC) in Spain and the ALMA Regional Centre at the University of Manchester in the UK.

"At the IAA we began studying this system twenty-five years ago. We were surprised when we discovered that SVS 13 was a radio binary, because only one star is seen in the optical. It was very strange to discover a pair of twin stars where one of them seemed to have evolved much faster than the other. We designed several experiments to get more details and to find out if in such a case either of the stars could form planets. Now we have seen that both stars are very young, and that both can form planets," said astronomer Guillem Anglada of IAA-CSIC.