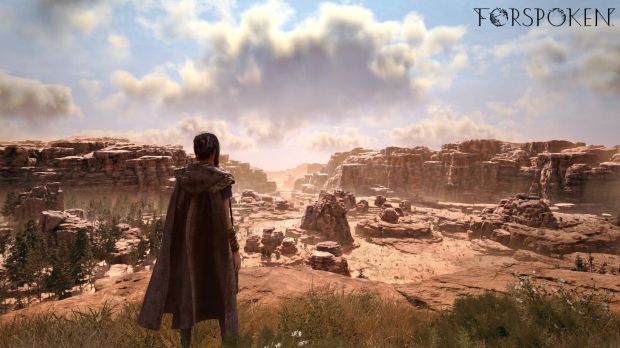 Forspoken was built from the ground up in close collaboration with AMD, and utilizes technologies like FidelityFX Super Resolution and raytracing. Luminous Productions has built AMD features right into its engine alongside support for Microsoft's new DirectStorage tech.

DirectStorage essentially enables full NVMe Gen4 x4 speeds by skipping the CPU and injecting data and assets right into the GPU's VRAM pool. Thus the process is much more efficient and data isn't potentially bottlenecked by the CPU, plus the CPU is more free to handle other tasks like optimizing in-game FPS.

DirectStorage goes hand-in-hand with other DX12 improvements like Sampler Feedback Streaming, which allows more targeted data streams to be fed into the GPU. This makes data management, delivery, and rendering much more streamlined and efficient.

Below is a quick refresher, and for a more detailed explanation of DirectStorage, click here. 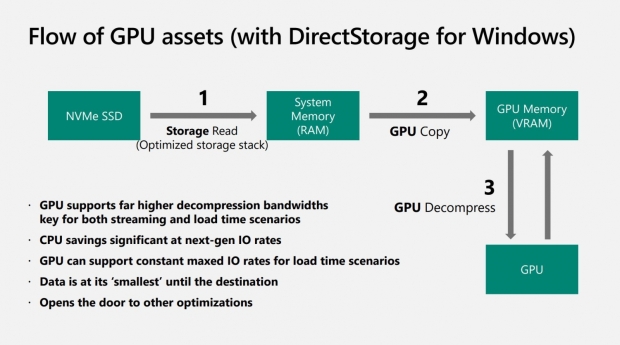 Typically, asset decompression is handled by Direct3D and the CPU itself (in the Series X's case, a special on-chip decompression block) and data assets are pulled from storage drives via the Windows storage stack. Block compressed and deflate-based compression geometry and texture data is decompressed at run-time from the SSD by D3D and the CPU, passed along to the system memory, then copied to the GPU for scene rendering.

DirectStorage, however, will use the GPU to decompress the assets. This means decompression won't be CPU-bound. DirectStorage will help unleash maximum IO rates for significantly lowered load sequences in video games.

The data will be read by a new optimized Windows storage stack (which includes Sampler Feedback Streaming and a new compression/decompression algorithm) and shot from the NVMe SSD right over to RAM, which copies the data directly to a GPU's VRAM, and then the compressed assets then use the GPUs power to decompress assets. These assets are then rendered by the GPU.