The rover team confirmed that the flower-like object seen in the photo is a mineral formation formed from minerals precipitating from water. These kinds of structures are known as diagenetic crystal clusters, which Curiosity has spotted in the past. This latest example has been named the "Blackthorn Salt."

The image is a composite image made from two to eight images taken by the Curiosity rover's Mars Hand Lens Imager (MAHLI), located on the turret at the end of the rover's robotic arm. The rover sometimes performs a focus merge on images like this one, where images of a subject that has been photographed at different focus positions are merged to bring all of its features into focus.

Performing the merge on Mars also reduces the amount of data that has to be transmitted back to Earth. Each focus merge turns up to eight images into two, a color image with the best focus and a black-and-white image that scientists can use to estimate the focus position of different elements. 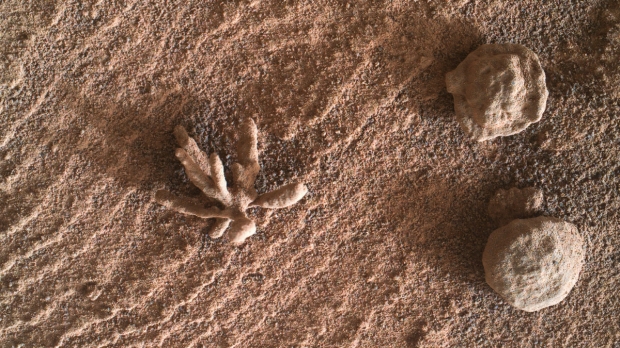