A map created by a historian of science that focuses on the history of nuclear weapons can estimate how much damage a nuclear bomb would create if it was dropped on a city of your choice.

A historian of science at the Stevens Institute of Technology, Alex Wellerstein, created an interactive map that uses declassified nuclear weapons effects data to estimate the damage caused by a variety of different nuclear weapons on populations around the world.

The map was originally released in February 2012, but since the ever-growing concerns regarding Russia's invasion of Ukraine and the recent reminders from Russia's President Vladimir Putin of the nation being the leading nation when it comes to nuclear weaponry, the map is a stark reminder of the power of nuclear weapons. 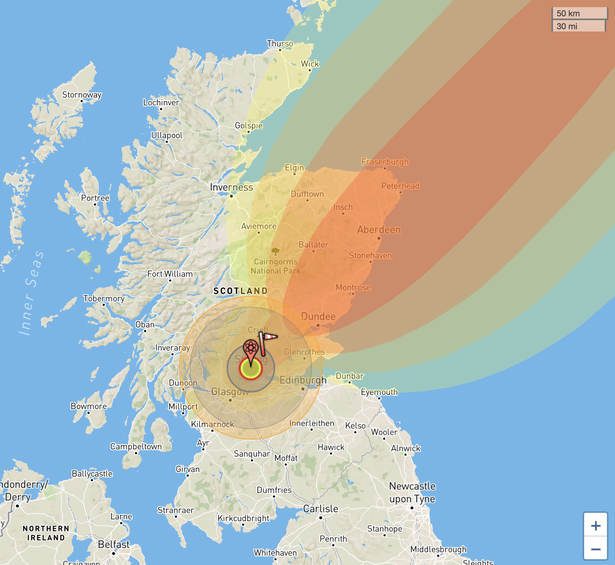 To use the map, users can select the type of nuclear bomb and the location of where it would be dropped. For example, suppose Russia dropped the most powerful nuclear weapon ever created and tested on central Scotland, the Tsar Bomba, a 100 megaton hydrogen aerial bomb. The map estimates there would be 292,480 deaths and 979,760 injuries. The above image shows a bright green circle within the center of the image. This color represents a "likely fatal" level of radiation, with 15% of survivors in the area would die of cancer in the years to come.

The yellow color is the approximate size of the fireball caused by the initial explosion, and anything within this radius would likely be completely vaporized. Furthermore, Glasgow and Edinburgh would likely experience moderate blast damage that would include: buildings collapsing, widespread fatalities, injuries, high chance of fires starting.

For more information on what would happen if a nuke was dropped on your city, check out the interactive map here, or continue reading here.