The artwork was made by Sacha Jafri, who made the world's largest painting on canvas over seven months during the COVID-19 pandemic. 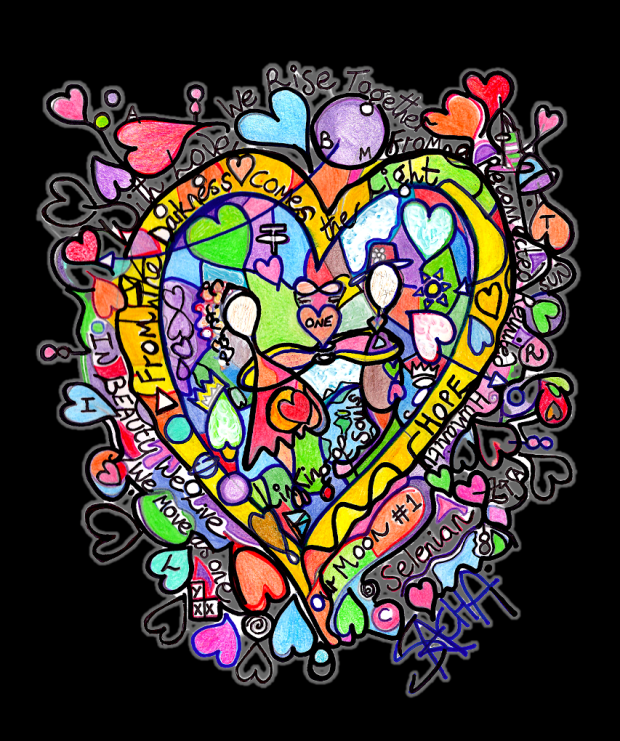 Credit: Sacha Jafri, 'We Rise Together - with the Light of the Moon'

The artwork to be placed on the Moon was revealed at The USA Pavilion at Expo 2020 Dubai, the United Arab Emirates, on February 23rd, 2022. It will make its way to the lunar surface as part of NASA's Commercial Lunar Payload Services (CLPS) initiative, marking the first commercial lunar mission under the initiative.

The mission has been brought together by Selenian, a company specializing in the curation of art in space. Selenian is working with Spacebit, a company developing space exploration technology, and Astrobotic Technology Inc., which provides end-to-end delivery services for Moon-bound payloads, to put the artwork on the Moon. The landing site for Jafri's artwork will become a world heritage landmark, to be preserved forever.

"The placement of my moon-landed heart artwork, entitled: 'We Rise Together - with the Light of the Moon', aims to reconnect Humanity to: ourselves, each other, our creator, and ultimately to 'The Soul of the Earth'. With figures, entwined in love, reaching for a new found understanding of unity and consequential hope, as they embark on their journey of exploration from our inhabited planet to our uninhabited Moon; through space and time, over mountain and star, to unlearn what we thought we knew and relearn everything through the Hearts, Minds, and Souls of our Children; the purest essence from which we have drifted so far, aiming to shine a light back on our broken planet, and start to heal it's fractured heart. We rise together, with a like-minded goal of creating a new vision for our world, focusing on the five pillars that will allow humanity to thrive once again: Universality, Consciousness, Connection, Empathy, and Equality," said Sacha Jafri in a press release from the Expo.

"In cooperation with Astrobotic and Sacha Jafri, sending the first ever official artwork to the Moon. It will be preserved on the lunar surface, out of reach, forever. I believe in the future where symbiosis of art and engineering will form a new wave of space exploration that will become a powerful tool to inspire, educate and give back to humanity," said Pavlo Tanasyuk, the founder of Spacebit.

"Just as Armstrong left the first footprint on the surface of the moon, Selenian is now set to leave the legacy of the moon's first official artwork by Sacha Jafri on the lunar surface. Our ultimate goal is to be the gateway portal to Space and the Moon for physical and digital art assets in turn giving back to the humanity community with purpose and utility here on Earth," said James Khazaei, the co-founder of Selenian.