Intel's upcoming Arc Alchemist is still a few months away and while it'll use the new DG2 GPU, the DG1 GPU is being put to --- well, I wouldn't say "good use" but more like some use -- by Chinese company GUNNIR. 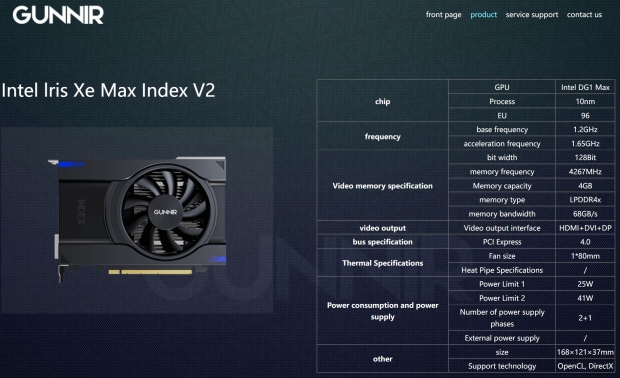 The new GUNNIR Iris Xe MAX Index V2 is the "flagship" one of the DG1 GPU bunch, which has been joined by the Iris Xe Index V2 and then the DG1 low-profile. The cost isn't too high at all, with the highest-end DG1-based GPU costing around $110 while the low-profile model is $90.

GUNNIR's new Iris Xe MAX Index V2 graphics card includes 96 EUs (768 shading units) and a GPU boost clock of up to 1.65Hz. There's 4GB of LPDDR4X memory clocked at 4.2Gbps on a 128-bit memory bus that is capable of just 68GB/sec. You won't be playing Crysis or Cyberpunk 2077 on this graphics card, that's for sure.

The power limit on GUNNIR's "flagship" Iris Xe MAX Index V2 graphics card is between 25-41W, with no external PCIe power connectors required. The non-MAX version of the card has reduced GPU clock speeds, down to 1.5GHz (from 1.65GHz) while everything else remains the same: 4GB LPDDR4X, 25-41W power, no PCIe power connector.

You can't just buy an Intel Iris Xe GPU and put it into a PC and begin using it... first off: there's absolutely zero support for an AMD platform, period. Secondly, Intel CPU support is only through Coffee Lake and Comet Lake CPUs, which are Intel Core 9th Gen and Intel Core 10th Gen processors only. Not only that, but you've also got Iris Xe GPU support for Intel B460, B365, and H310C-based motherboards.