The M3A32-MVP Deluxe/WiFi-AP not only has onboard 802.11b/g Wi-Fi, but it also features what Asus calls Cool Mempipe Technology which are heatsinks attached to the heatpipes on the motherboard which apparently will lower the DDR2 memory temperatures by as much as 10 degrees C. 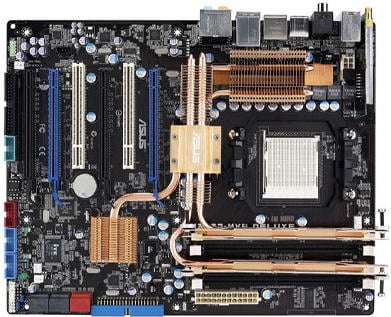 Both boards feature four x16 PCI Express 2.0 slots, but depending on how many you use, you either end up with two x16, one x16 and two x8 or four x8 in terms of available bandwidth. The boards also have two PCI slots. Both models have extensive heatpipe cooling and Asus' new 8+2 phase power design.

The rear I/O consists of a PS/2 port, six USB 2.0 ports with a further four available from onboard headers, Gigabit Ethernet, 7.1-channel HD audio with optical and coaxial S/PDIF, FireWire and eSATA. The WiFi-AP version also has its Wi-Fi card mounted next to the PS/2 and USB ports at the top most part of the board. 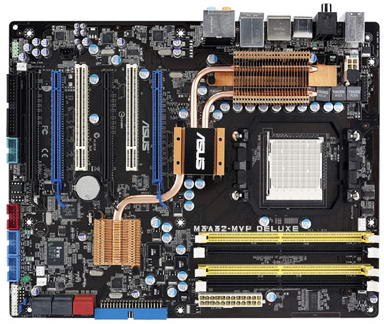 Both boards also feature six SATA connectors, two of which are on a separate controller, as well as an IDE and floppy connector. The four memory slots accepts DDR2-1066 memory if you're using a Phenom processor and works with ECC and non ECC modules.

You can find the press release here
Newsletter Subscription