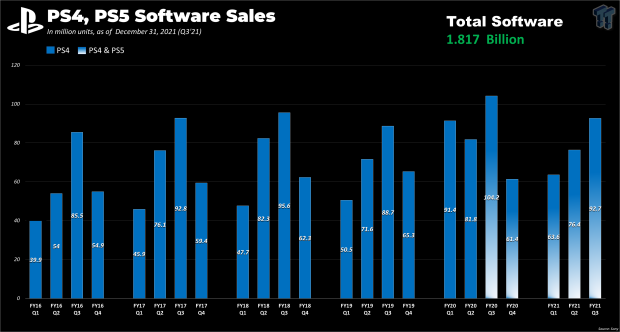 Although console shipments (and sales) are dropping, software is rising exponentially with over $3 billion earned from digital games and add-ons in Q3. Sony also provided updated figures on PS4 and PS5 combined software sales...and the numbers are quite surprising.

According to our findings, the PlayStation 4 and PlayStation 5 consoles have sold 1.817 billion games as of December 31, 2021. This data is based on the 1.181 billion software sales figure Sony provided in Q3'19 added to the sum of FY20's full-year software sales and FY21 Q1-3 data.

How many of these sales are PS4 games? Nearly all of them, of course.

Apart from that, the mix is hard to determine.

Digital accounts for the lion's share or revenues; ResetERA's ArmGunar notes that digital software made up 53% of PlayStation's quarterly earnings.