A powerful underwater volcano located about 40 miles south of Tonga has erupted, spawning a tsunami that has now impacted the mainland.

The eruption happened on January 15 and was captured on film from the U.S. National Oceanic and Atmospheric Administration's (NOAA) GOES-West Earth-observing satellite. The footage showcases a large mushroom cloud of toxic ash erupting from the ocean and climbing as high as 12 miles in altitude. The eruption caused a sonic boom and a 4-foot tsunami to hit Tonga's capital of Nuku'alofa.

Tongan Olympian, Pita Taufatofua, has announced a GoFundMe page dedicated to providing relief for all Tongans affected by the tsunami. According to the description on the GoFundMe page, the eruption has "devastated Tonga," and that all communications with the island have been cut off.

Other GoFundMe pages have popped up asking for funds for "food, water and shelter" as the "entire country is covered in volcano ash that's affecting their food crops", writes Vik Teumohenga of the Tonga Friendly Islands Community of South Australia Incorporated. Check out the GoFundMe page here.

As of Monday, January 17, there is still no communication coming out of Tonga. Australia and New Zealand have sent surveillance flights to assess the damage. 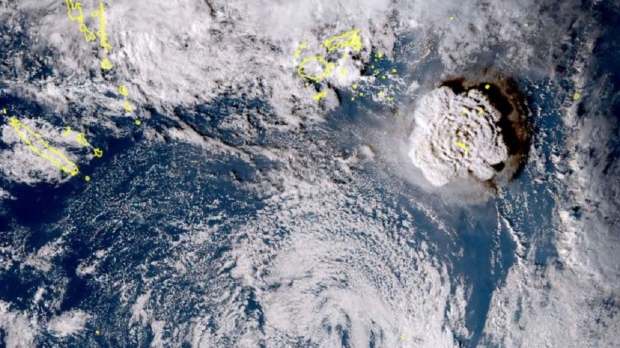